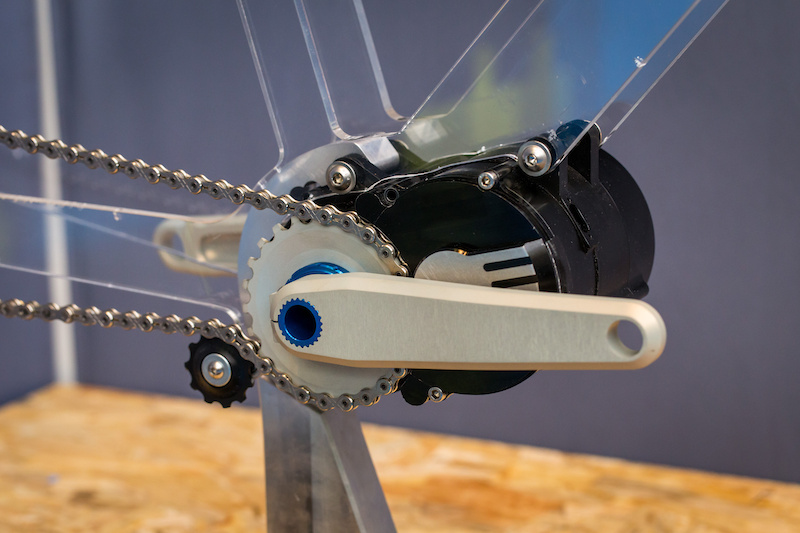 Just like with suspension and drivetrains, it’s likely that the e-bike motor and battery game will come to be dominated by just a few big names. And likewise, if any underdogs want to gain a foothold, they’ve got to have something unique to offer. Eurobike, of course, is never short on unique e-bikes, but this year features three motor brands that actually do their manufacturing in Europe. Each has a pretty fresh take on the e-bike concept, but they aren’t just here to be weird.

Ok, maybe a little weird. No, this monstrosity is not a mountain bike, but it’s what’s inside that counts. Beneath that gaudy carbon weave made by fashion-first framebuilder, Lavelle, is the Finland-made Revonte One drive unit. The motor components are made by hGears, a small-motor supplier of the auto industry founded in Germany in 1958. We’ve been seeing 3d renders of Revonte’s automatic-transmission motor since 2020, but this was our first chance to actually see one in person.
There, that’s better. Though not as smooth and swoopy as, say, a Shimano Ep8 drive unit, the Revonte looks remarkably compact, especially when you consider everything they fit in there. That includes the continuously variable transmission and not one but two motors.

One of those motors works like most other e-bike drive units by directly turning the chainring or belt driver. This is what’s inside that cube that’s oriented perpendicularly to the bottom bracket. The other motor is concentric to the bottom bracket itself, and it’s what powers the transmission. Up to rider torque, it responds drives a planetary gear mechanism that essentially changes the gear ratio while also providing a driving force. Revonte explains how it works here.

Or, if you want a more fun explanation, Revonte had a Lego representation of how the One actually works. Let’s hear it for educational toys.

Another system that we’ve previously seen mocked up in plastic is the Valeo Cyclee drive unit, featuring a gearbox by France’s more gravity-focused answer to Pinion, Effigear. But there are actually working models at this year’s Eurobike. Valeo, like hGears, manufactures the little motors that do just about everything in your car but make it go vroom. On display at this year’s Eurobike were a few Valeo units bolted into bikes from Cavalerie, which, like the Valeo motor and Effigear gearbox, are also all manufactured in France.
Talking to the folks at Effigear, they have a refreshingly practical motivation for getting into the e-bike game. Of course, they want to put both a gearbox and an e-bike motor under one top tube, but they want to do it in a way that serves smaller e-bike manufacturers. Especially now in the age of The Great Supply Chain Disruption, it’s hard for some designers to get the attention of Shimano, Bosch, Brose, or Yamaha. But Effigear wants to serve those out there with a not-so-mainstream idea for a bike that could use a not-so-mainstream drive unit.
The Valeo Cyclee is built around Effigear’s 9-speed system with a 450% gear range. Both of those numbers are lower than what you’ll see from Pinion, but Effigear has its perks. It’s possible to do the actual shifting under load, though downshifting won’t actually occur until you let off the pressure. This system makes it possible for the non-motorized Effigear gearboxes to work with a trigger shifter, not just a twist shifter. Or, in the case of the Valeo Cyclee, a push-button electronic shifter. Of course, a 3-D printed prototype for now, but hey. Give it time.

Perhaps the furthest along among the underdogs is Intradrive. There’s even an essentially off-the-shelf Orange Phase e-bike at this year’s Eurobike that’s been fitted with an Intradrive system. That’s possible because Intradrive built their motor around the same mounting interface used by Shimano. They even went so far as to produce a battery with the same mounting points that Shimano uses. The long-term impact of this approach could be earth-shaking for the e-bike industry. In the same way that a brand can choose to spec RockShox or EXT suspension on the same frame, they could theoretically spec a Shimano motor with a traditional drivetrain, or they could spec an Intradrive unit.
The Intradrive gearbox offers a 430% gear range across 8 speeds, it’s shifted electronically, and is driven by Intradrive’s 80 nm motor. That motor, and all of its components, are designed to be serviced or recycled. There’s a whole drop-down tab on Instadrive’s website about their commitment to sustainability. Step one was to base manufacturing in the UK. Step two is to manufacture enough to keep up with demand.