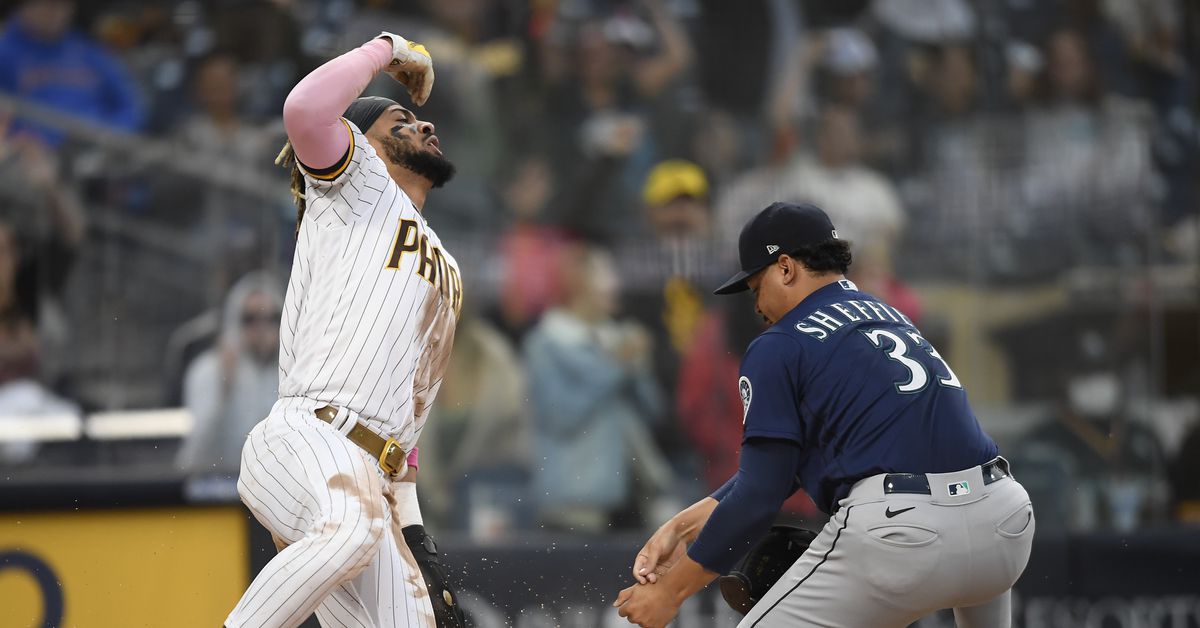 Sometimes scrolling through the pictures in the photo tool helps bring back memories long repressed. I was looking for some pictures from the Mariners’ improbable comeback win in 2016, but instead stumbled on picture after picture from the painful three-game sweep they suffered at the hands of the Padres in May of 2021. In case you too have repressed it , they lost the first game 16-1, the second game 6-4, and the last one 9-2, doing some irreparable damage to both the run differential and the fun differential of the 2021 Mariners, although as Jake pointed out in the series preview, the two teams diverged sharply after that. This time the Padres won’t have superstar Fernando Tatís Jr. to wreak havoc on the Mariners, but Manny Machado—John’s pre-season MVP pick—has picked up all the slack there and then some.

The Mariners get JP Crawford back in the lineup after he’s finished out his suspension but will lose Jesse Winker for a week as he serves his, which means Marcus Wilson gets his first-ever career start. Adam Frazier sits against his former team and the lefty Manaea.

Scott Servis sounded optimism that we will see Ty France during the team’s next series at home vs. the Jays (Thursday-Sunday).

If you’re convenient to Everett, swing on over to the AquaSox game sometime this week, where you can see Kyle Lewis in rehab action (the Rainiers are in Reno this week, so KLew will be chilling with the FrogBois):

Breaking news: 2020 rookie of the year @Killer_5 will be joining the AquaSox on rehab assignment starting TONIGHT!! Grab your tickets ASAP as we’re nearing a sellout crowd pic.twitter.com/LfvpZtQjoj

Marco bailing out of this video is my favorite part of it:

Today’s game starts at 3:40 PT, a weird start time for a weird little two-game series that starts on a holiday. If you’re out and about you can catch the game on the radio on Seattle Sports 710, or if, like me, you’re stuck inside with scared animals and a bunch of neighbors who think the “no fireworks” mandate is a charming suggestion rather than the law, you can watch the game on ROOT Sports NW.