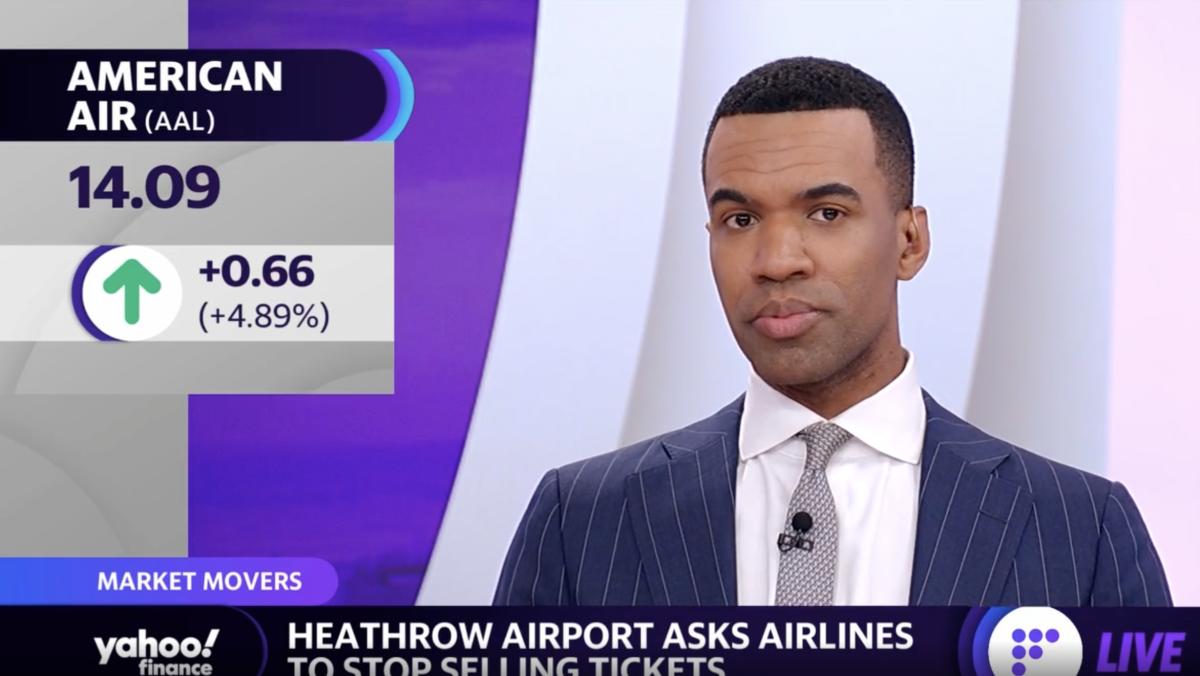 – All right. Last one here for us. American Airlines reiterating its expectation and forecasting a jump in second quarter sales even as costs continue to rise. Good market reaction here, by and large. Pretty good results and pre-announcement from American Airlines. Immediately you have to think you’ll be hearing similar type of tone from other airlines this week and next week as they pre-announce before earnings.

– The thing with airlines right now, and particularly what I’d been looking at within the average seat mile and the available seat mile here, because it came in at around what, 66 million seat miles that they had had and seen in this most recent —

– –with the bill. Yeah. All right. So with that in mind, I mean, that is still just barely above what we had seen in their previous guidance at 8.5% higher, and then additionally they hit on the midpoint of their total revenue.

But I think for the revenue that they’re seeing per available seat mile and that coming in above expectations, what does this signal perhaps for how much the rest of the airlines have also needed to pass through everything from higher fuel costs–which they Also did point out were well above expectations? They had been looking in their previous guidance for that to be at $3.92 to $3.97. That came in at $4 to $4.05. So that is something that allows us to get a little bit of a glimpse into what the other airlines– Southwest, Delta, United– may have also been having to navigate those–

And American doesn’t really allude to this, so it’s unclear what material effects we are seeing from the mess that is the airports in the United States right now– the capacity cuts that we have seen. Maybe that’s helping them keep their rationality to some of these numbers here and keep some of these numbers up. But it’s a big mess. And what really caught our attention this morning is the news out of London’s Heathrow Airport, which said to airlines flying to Heathrow, don’t sell any more tickets for the summer, which I don’t recall ever– you can imagine if- –

– That’d be great for traffic around the area.

– And even if the airline stops selling tickets tomorrow, Heathrow says they still can’t handle the existing traffic that’s coming in and out. You have sicknesses that are going on among staff at the airports and at the airlines. You have obviously weather, as you do every summer causing issues. You have a huge surge in travel demand from very low levels. And the airlines are just obviously struggling with all of this.

– Right. And for Heathrow, what we had particularly watched for the airlines in reaction to this– I mean, you think about the number of routes that Delta runs into there. I believe Delta runs 13 flights a day in and out of Heathrow itself. And UK, right now for Delta, for American and their own expansion and just trying to ramp up and getting back to pre-pandemic levels, that had been considerable in the amount of international travelers, which to your point earlier, were trying to take advantage of that dollar conversion too.