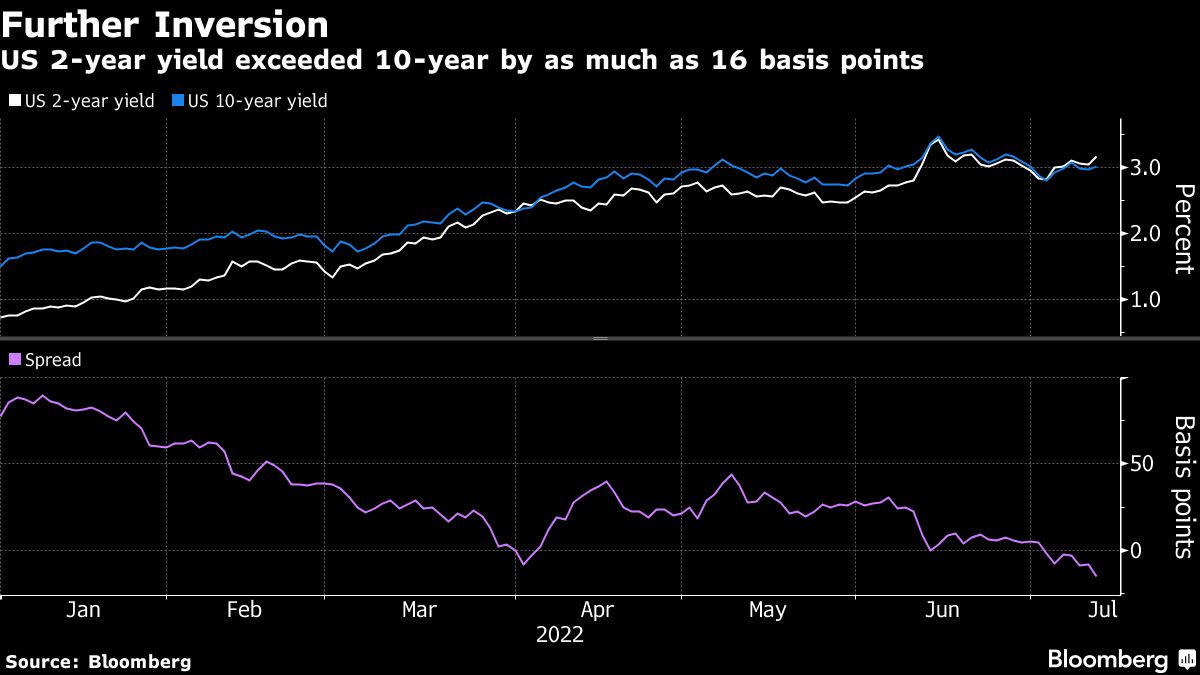 (Bloomberg) — US Treasury yields jumped after another hotter-than-expected inflation report kindled bets that the Federal Reserve could raise rates by as much as a full percentage point this month.

Most Read from Bloomberg

The increase was led by shorter-dated securities sensitive to policy changes, with yields on two-year notes climbing as much as 16 basis points to 3.21% before paring the jump. That pushed the yield above those on 10-year notes by the most since 2006, signaling increasing risk that higher rates will stall economic growth.

The 9.1% annual rise in the consumer price index was the largest since 1981 and the latest in a string of faster-than-expected increases that are pushing the Fed to act more aggressively to keep inflation from becoming entrenched.

After the report, traders are priced in virtual certainty that the Fed will increase its benchmark rate by three-quarters of a percentage point at the July and September meetings, with a one-third chance of a full-point increase at this month’s gathering. On Wednesday, the Bank of Canada surprised markets by raising rates by that amount.

“The headline data is going to be extremely problematic for the Fed messaging and is going to linger for an extended period,” said David Robin, a strategist at TJM. “A 75-basis-point hike is certain in July and now 75 basis points again becomes an increased certainty in September as the Fed falls further and further behind the curve.”

The persistent inflation comes after the Fed raised its policy rate by 75 basis points in June, the biggest increase since 1994, and tighter monetary policy is cooling rate-sensitive sectors of the economy like home sales. Another three-quarter-point increase in July was already priced into swap contracts before the CPI data; Afterward, the contracts are priced in the chances of an even bigger move.

While the cost of hotel and airline fares, as well as car rentals, fell from May to June, following historic increases in recent months, other sectors, such as housing, accelerated and kept price pressures elevated.

These details suggest that inflation report isn’t as strong as it appeared to be, because the declines of things such as travel expenses signals that consumers are cutting back, said Gang Hu, managing partner at Winshore Capital Partners, which specializes in inflation-protected investments.

The stronger components such as housing are likely to turn down in coming months, because of rising rates, said Hu.

“What it does is it might push people’s inflation higher expectation and force the Fed to overshoot,” said Hu. It’s not a market “friendly number,” he said.

The swaps market shows that the Fed’s benchmark borrowing costs may peak at about 3.75% in the first quarter, from the current level of 1.75%. Traders then expect that the Fed to start cutting rates.

Investors will be watching closely in the coming days for signals from Fed officials on whether they will increase the scale of their rate hikes at the July 27 meeting.

Priya Misra, global head of rates strategy at TD Securities, said she expects the Fed to stick with a three-quarter-point hike, given Chair Jerome Powell’s prior guidance.

“The Fed is very nimble and they are unconditionally focused on inflation. But we think they go 75,” she said on Bloomberg Television. “We’ll see if their message changes.”

Most Read from Bloomberg Businessweek