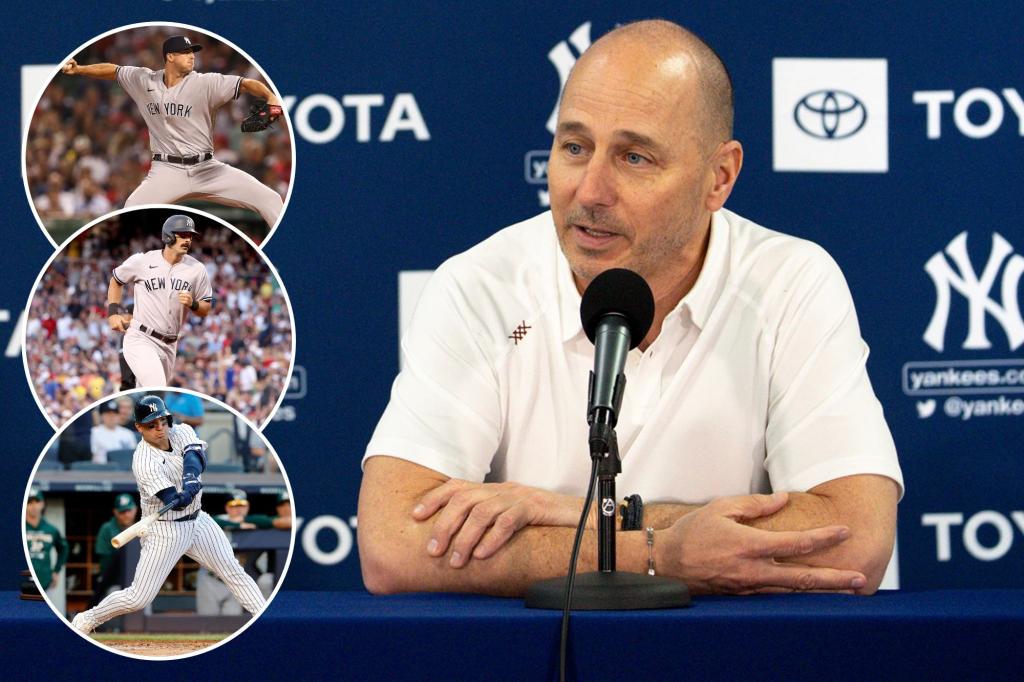 General manager Brian Cashman, the second most important Yankees free agent, left Boston after watching his Yankees’ first three games here. He still has work to do — a little anyway.

Cashman continues to try to refine their roster, which may feel like Da Vinci’s last few strokes on the Mona Lisa. His masterpiece doesn’t need much.

As we reported here Sunday, Cashman wouldn’t mind rejiggering the outfield, maybe by bringing in a contact hitter with pedigree like ex-Red Sox Andrew Benintendi from Kansas City and putting Joey Gallo out of his Bronx-induced slump by sending him somewhere they don’t boo strikeouts. While Cashman’s eyeing outfielders (Anthony Santander and Ian Happ would also fit), Matt Carpenter’s latest star turn makes even that endeavor a luxury.

The Yankees wouldn’t mind another starter, and they do like Luis Castillo, but with the Reds’ requesting one of two top shortstop prospects — Anthony Volpe or Oswald Peraza — they may end up settling for a depth piece instead. Like everyone else, they’ll look at the bullpen, but with talented relievers Jonathan Loaisiga and Zack Britton heading back to an already excellent pen, that’s not a major need either.

With a team this good in what promises to be an extreme seller’s market, the challenge to improve looks steep.

“Obviously, we’re staying engaged,” Cashman said by phone. “The job is always to find a way to make us better.”

The Yankees’ plus-177 run differential suggests the record is far from a fluke, so no deal is actually necessary. Any potential Gallo trade seems more a mission of mercy, though of course it does makes perfect sense Cashman tries to undo maybe the one move that didn’t work.

Using a little more than loose change in the winter, Cashman and Co. somehow improved this squad to where it’s compared to the best in club history, like 1927, 1961 and Cashman’s very first 1998 team, with a roster he mostly inherited after GM Bob Watson couldn’t take The Boss anymore and quit. In Cashman’s quarter century, the Yankees missed the playoffs exactly twice and had zero losing seasons.

And while he works for Hal, the level-headed Steinbrenner, that is also the Steinbrenner who maintains a budget and rarely goes for the shiniest object in sight. In that sense, the two men are a perfect marriage. Young Steinbrenner isn’t one to overspend, and young Cash (he just turned 55) does enjoy a bargain. There is no end in sight to this pairing, which isn’t such a bad thing.

Cashman, whose contract is up after this year, surely would like to return for a 26th season, as folks around him say he still enjoys the job. When I mentioned what great work he did this year, reflexively he responded that he’s usually the dumbest one in the room. If that’s true, he gets the lifetime overachievement award.

While Cashman wouldn’t outscore right-hand man Mike Fishman (Yale) on an SAT test (“Not even close!” Cashman said), he possesses more important qualities for the assignment at hand. Those include a thick skin, an ability to get along with all kinds (even reporters), a willingness to admit weaknesses (he’s a little enthusiastic in that regard) and the wisdom to listen to the right folks.

The Yankees will look to prove their already excellent bullpen and deepen their rock-solid rotation. But the real trick would be to find an appropriate deal for Gallo. A couple ex-bosses in Texas and in San Diego could have interest, and those locales may be more his speed. But it’s not easy to sell this low (.166 at last count).

The amazing thing is, Cashman erred once in a near perfect year of dealing that’s brought them to 61-25 at a very reasonable $250 million payroll for baseball’s revenue leader.

Incredibly, he found multiple stars on a shoestring.

1. Cashman brought in Isiah Kiner-Falefa in a complicated deal that also off-loaded controversial catcher Gary Sanchez and took on the $25 million salary of Josh Donaldson, the one real expenditure in a winter where they passed on Carlos Correa, Corey Seager and other big -ticket items.

2. He signed Carpenter off the scrap heap, and he’s taken a regular spot in the middle of the lineup, lessening the need to add another outfielder. Carpenter now has equaled Gallo’s home run total and surpassed his RBI total in 141 fewer at-bats.

3. He acquired now All-Star catcher Jose Trevino for two relievers, one of whom is now back with the club. Trevino, originally seen as a depth piece, leads the league in many defensive metrics.

4. He acquired almost unhittable closer Clay Holmes from Pittsburgh for a couple pieces that didn’t fit into the Yankees’ future.

Coincidentally, Trevino and Carpenter both came from Texas, and Kiner-Falefa really did, too, discounting his overnight stopover in Minnesota. The Yankees really owe the Rangers.

To repay them, how about giving them back Gallo? Even if that can’t be arranged, this has to be Cashman’s finest year out of 25 pretty darned good ones.