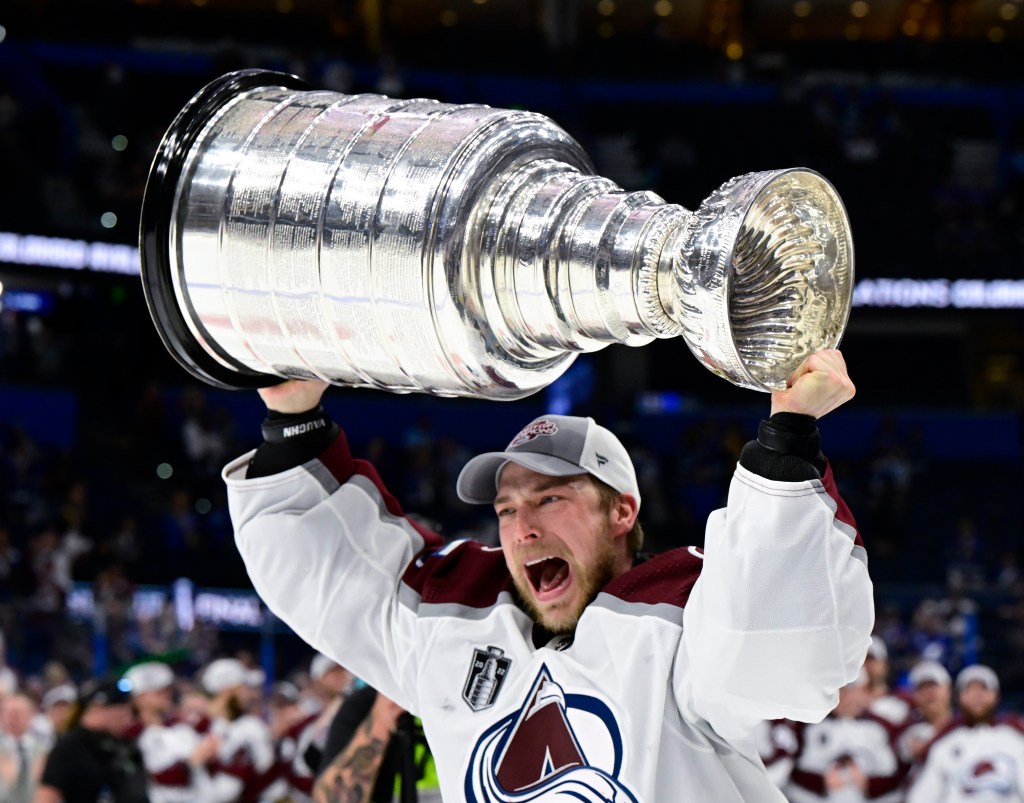 Their Stanley Cup runneth over with bags of money. The Avs are champs, and champs want to get paid. They were brothers in a championship quest. But money will rip them apart. Starting now.

Thanks for out-dueling the best goalie on the planet that unforgettable night when Colorado hoisted the Cup. Avalanche general manager Joe Sakic, however, showed Thursday what he really thinks of Kuemper, making a significant draft day trade that shipped three picks to the New York Rangers for backup netminder Alexandar Georgiev.

What’s next? We will find out whether Nazem Kadri loves Colorado more than money.

Although we get misty about how Kadri grew as a player and man to become the emotional spark plug of Colorado’s drive for a championship, team management would be crazy to pay top dollar for a 31-year-old center coming off an outlier of a career season.

After slamming beers faster than the Coors brewery can make them, here’s a sobering thought for the newly crowned champs: Building a dynasty requires tough economic choices that demand players make sacrifices in pursuit of winning, and Sakic won’t hand out lavish salaries based on sentimentality.

Giddy about the Cup coming home to Colorado for the first time since 2001, it would be nice, not to mention incredibly naïve, to think the Avalanche could run it all back next season.

But the buh-bye to Kuemper reminded us that keeping the band together is a sentimental fantasy in a league with a hard salary cap — a harsh reality franchise owner Stan Kroenke warned us about amid the championship celebration in Tampa. With a bill quickly coming due on a contract extension for center Nathan MacKinnon, the Avs will be forced to undergo a significant makeover to fight off challengers next season, when the cap is set at $82.5 million.

Sakic learned the hockey business at the right (iron) hand of Pierre Lacroix, who loved Avalanche players like his kids, until they came asking for a hefty bump in allowance. Franchise management has long held to the guiding principle of sticking to an internally set salary structure, rather than reacting to the market rate set by some greater fool in another NHL city.

And that’s why Kadri has to go, pack his bags and move on to Seattle or Phoenix or Washington, unless he’s willing to take a major hometown discount to remain with his brothers in burgundy and blue.

MacKinnon has worked for an average salary of $6.3 million on an absurdly team-friendly contract for six seasons. A year ago, Sakic was willing to play a game of financial chicken with captain Gabe Landeskog, before signing him for a new deal worth $7 million per annum at the 11th hour. The course of Avalanche history is dotted with top-level performers, from Chris Drury to Ryan O’Reilly, who felt underappreciated and were shown the door.

Despite a well-deserved selection as an all-star for the first time in his career, Kadri is not worth a single penny more to the Avalanche than Landeskog, whose mental toughness and steady leadership is priceless. While the 1.23-points-per-game production of Kadri during the regular season was phenomenal, it’s hard to see how a player who has averaged .69 ppg throughout a lengthy career will be able to maintain anywhere near that excellence into his mid-30s .

It would be no surprise if a team desperate to make a free-agent splash offers Kadri a salary north of $8 million. But a hockey dynasty is not built with stupid money, and that’s why Sakic would be wise to let Kadri walk.

For starters, the Avalanche could use the money saved to re-sign free agent Valeri Nichushkin, more than four years younger than Kadri and every bit as essential to Colorado winning the Cup. The Avs could begin shopping for a No. 2 center to replace Kadri in New York, where Rangers Ryan Strome and Andrew Copp are expected to hit the free-agent market.

The hard road to the Cup goes on forever, but the victory party abruptly ends.

It is Sakic’s tall task to build a dynasty within strict economic parameters.

And that won’t be easy, especially if you know NHL history.

I recall standing alongside Kroenke during a regular-season game in 2004, wondering aloud if the then-looming labor strife was worth the risk to Colorado, which had enjoyed a long run of on-ice success, including two championships, under the old economic rules.

Without hesitation, Kroenke told me cost certainty for all teams in the league absolutely had to take priority over the championship ambition of any individual franchise. He obviously meant it. During the next 12 months, the NHL became the first sports league in North America to lose an entire season to labor strife.

Yeah, I know. It seems like that conversation with Kroenke was forever ago.

Why do I mention it now? Because forever is also roughly how long it took the Avs to climb back to the NHL peak.

Staying atop the heap?