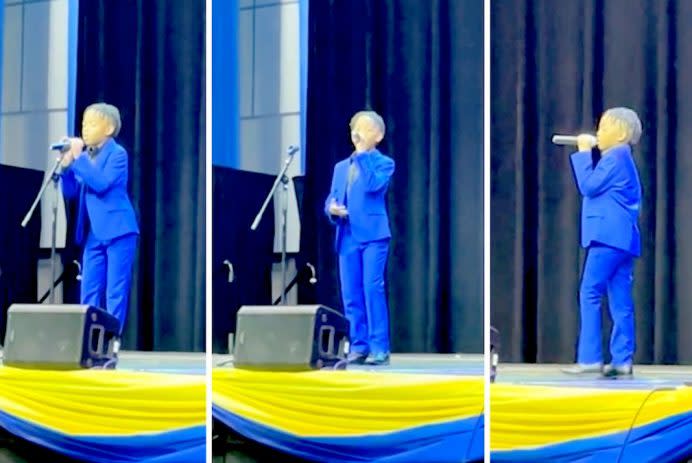 A little boy’s performance of Sam Cooke’s “A Change Is Gonna Come” blew away his audience at a Shreveport, La., talent show — and now his powerful voice is going viral on TikTok.

Jordan Hollins gained over 8.8 million views when his chilling performance at the ArtBreak talent show was uploaded to the TikTok account @carezthe1.

But with his “old soul” voice, Jordan didn’t just win his local talent show; he won the hearts of TikTokers around the world.

Now, much like the 16-year-old babysitter who had no idea she was being recorded when she sang a chilling rendition of “Part of Your World,” Jordan’s stirring performance might have just earned him a gold-paved singing career.

“The rest PLEASE 😳,” one user begged.

TikTokers couldn’t believe that such a powerful voice could come from a fifth grader.

“As my granny would say, ‘That baby sang like he was here before.’ 😭,” one user wrote.

“Omg. Chills all over my body,” commented another.

“Listen to this baby pull from his ancestors.. 💙,” another user wrote.

“This is like one of those videos in a documentary about a famous singer from before they get famous,” one comment read.

“Dat young man has an old soul and a wonderful voice. Great control. Very impressed, keep it up young man!” applauded another user.

“Sam Cooke soul in that baby right there!!!!!! You better sang,” wrote another user.

Sam Cooke’s song “A Change Is Gonna Come” was written in 1963 and inspired by various events in Cooke’s life — most notably, when he and his entourage were turned away from a whites-only motel in Louisiana.

That a 10-year-old could capture the depth of such a powerful song just speaks to his massive talent — talent that has already been featured on The View in a special Juneteenth performance with gospel singer Kirk Franklin.

Christian Cowan’s first foray into menswear lets everyone be ‘part of that fantasy’:

In The Know is now available on Apple News — follow us here!

If you enjoyed this story, check out this baby who was brought to tears by his mom’s soulful singing voice.

The post 5th grader blows away audience with his ‘old soul’ singing voice at talent show: ‘Chills all over my body’ appeared first on In The Know.

More from In The Know:

Toddler’s emotional wedding haka steals the show at reception: ‘Why did this make me cry?’

Mom’s powerfully raw video is ‘unlocking’ TikTokers’ secret, bottled-up emotions: ‘I didn’t know how much I needed this’

Stock up on the 10 most popular work-from-home essentials before Prime Day 2022 ends!