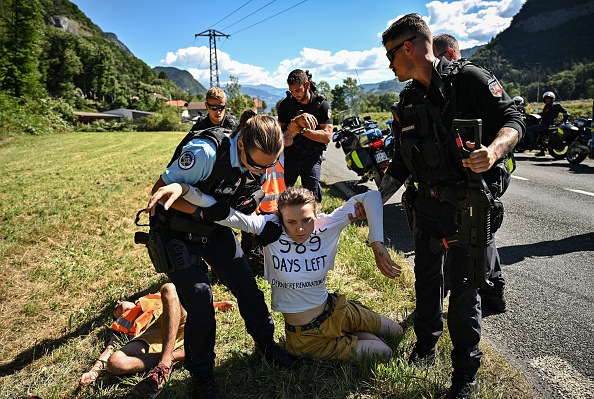 A 15-minute delay occurred at the Tour de France after a group of crazed climate change protestors blocked off a portion of the trail: halting a large group of cyclists at the 10th stage of the race.

On Tuesday, nine protestors arrived at the Tour for an exhibition highlighting supposed dangers from the climate crisis, which they claim — under current circumstances — will exterminate the planet in “989 days.”

The group lit flares that sent colored smoke across the track, obscuring the view of oncoming cyclists, and attempted to glue themselves onto the road. The were also reportedly chained together and wore shirts that read, “Only 989 days left to save our future.”

According to Politico, one of the protestors delivered a press release encouraging civil supporters to “act and enter into resistance today to save what remains to be saved.”

The protestor, named Alice, said, “The reality is that the world towards which politicians are sending us is a world in which the Tour de France can no longer exist.”

French authorities intervened at the location — 148.1 km between Morzine and Megeve — and the peloton halted all cyclists in order to remove the located. The protestors were promptly arrested — some of them were reportedly maced.

The activist group, Derniere Renovation, released a statement on Twitter.

“Our goal is to force legislation to drastically reduce France’s emissions, starting with energy reform, the area most likely to bring together social and climate justice today.

“This is our last chance to avoid catastrophic and irreversible consequences: deadly heat, extreme weather events, famines, mass migrations, armed conflicts… and this is for all the next generations of humans.”

Stay tuned with OutKick as the story develops.