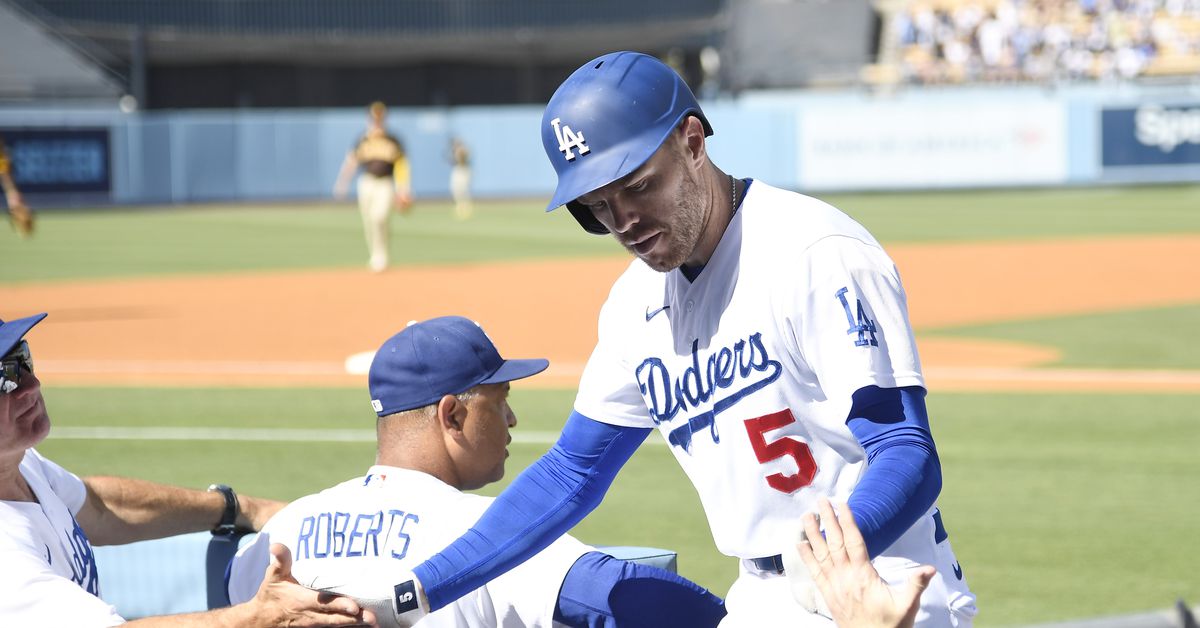 Going deep has been the difference between the Dodgers and Padres so far in this weekend showdown series between the top two teams in the National League West. Los Angeles has won all three games, out-homering San Diego in all three games, including three home runs in Saturday’s 7-2 win at Dodger Stadium.

Yu Darvish had been excellent in limiting home runs this season, giving up only six in his first 14 starts, two home runs in each of the first three months. Within his first dozen pitches of July, the Dodgers took him deep three times.

Freddie Freeman, Will Smith, and Justin Turner homered in the first inning, with Max Muncy’s 367-foot drive tracked down in center field in between. That’s the third time the Dodgers have hit three home runs in an inning this season. They also did so on April 13 against Dereck Rodriguez in the eighth inning at the Twins, then again in the first game of a doubleheader on May 17 in the sixth inning against D-backs left-hander Tyler Gilbert.

The Dodgers stacked on single runs in each of the next two innings, lumping together a double and single in back-to-back frames to widen the advantage.

Los Angels has seven home runs through the first three games of the series against San Diego, who has only hit two home runs this weekend. The Dodgers on the season is 30-6 (.833) when out-homering their opponents this season.

To Darvish’s credit, he recovered after the early onslaught last six innings, striking out 10. He retired 10 of his last 11 batters faced, with the only non-out because of an error. But the damage was already done.

Getting all the home runs certainly helped, but the Dodgers could have made do with just about any sort of offense in this series, allowing only four runs to the Padres in 27 innings.

Tyler Anderson provided the same steadiness he has for the first half of the season, lasting at least six innings for the eighth time in his last 10 starts. The left-hander kept the Padres off the board through six, but gave up two hits while recording one out in the seventh, allowing San Diego’s first run of the game.

Anderson struck out six and was especially effective with the changeup and cutter, getting seven swinging strikes on each. Those two pitches counted for almost half (48) of his 97 pitches.

Brusdar Graterol got out of the seventh without any further damage, including a strikeout of Manny Machado to end the inning.

Luke Voit’s home run off Reyes Moronta in the eighth inning was the Padres’ first, and so far only, run scored off LA’s bullpen this weekend. Dodgers relievers in the series have pitched 8⅓ innings, allowing five hits and three walks, with 10 strikeouts.

Chris Taylor left Saturday’s game after five innings with what the team called a left foot contusion. He was walking gingerly in the right field while trying to make a sliding catch on Jose Azocar’s fly-ball double in the top of the fifth inning. Taylor fouled a ball off his left foot in the third inning.

The Dodgers go for the showdown series sweep on Sunday afternoon (1:10 pm, SportsNet LA), with Clayton Kershaw making his 198th regular season start at Dodger Stadium. Not all this season, that would be a record. Stellar rookie left-hander MacKenzie Gore starts for San Diego.