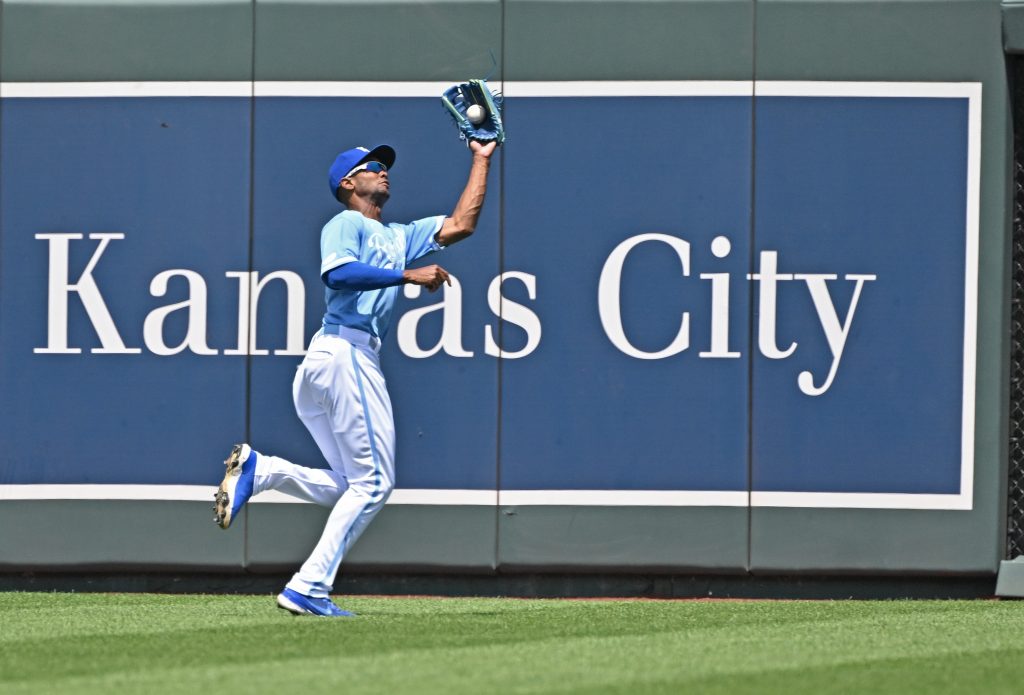 Yesterday’s acquisition of Drew Waters gives the Royals a potential near-term option to evaluate in the outfield, and general manager JJ Picollo spoke highly of Waters’ future when chatting with the Kansas City beat in the wake of the trade (link via Lynn Worthy of the Kansas City Star) . Picollo called Waters a “plus defender” and a “true center fielder,” praising the switch-hitter’s speed and overall upside — even with Waters “still refining some skills” at the plate.

That’s a rather favorable characterization of a player who’s whiffed in 27.1% of his plate appearances during his third season at the Triple-A level, although to Waters’ credit, that strikeout rate is down significantly from his 36.1% mark in Triple-A in 2019 and from last year’s 30.9% pace. Struggles in the upper minors notwithstanding, Waters is still just 23 years old, has long been graded as a plus runner and potential asset in the outfield grass, and isn’t too far removed from a monster 2019 showing in Double-A. There’s plenty of reason to be optimism about Waters as a player, even if his prospect star has dimmed in recent years.

The broader-reaching question for Royals fans — and for fans of teams seeking outfield upgrades around the league — is just what this trade will mean for the Royals’ outfield moving forward. The Waters acquisition isn’t likely to have much of a bearing on Andrew Benintendi‘s future; As a productive and affordable free-agent-to-be on a last-place team, Benintendi was one of the likeliest trade candidates in all of baseball with or without Waters around. (We ranked him No. 2 on last week’s Top 50 trade candidate list.)

As MLBTR’s Darragh McDonald explored last month, however, Benintendi isn’t the only trade candidate in the Royals’ outfield. Center fielder Michael A. Taylor is having the finest season of his big league career, and he’s playing on an affordable two-year, $9MM contract. That makes it tempting for the Royals to keep him around into 2023, but Taylor’s greatest asset is his glove in center, and Picollo made clear the Royals view Waters as a plus option in center as well. There’s plenty of room for both Waters and Taylor to slot into the same outfield — especially assuming an eventual Benintendi deal — but it’s still of some note that the Royals would seemingly feel confident that Waters could step into Taylor’s shoes in the event of a trade, at least from a defensive standpoint.

Taylor has indeed drawn interest from other clubs, with MLB.com’s Jon Morosi tweeting last night that the Yankees are among those who’ve considered him in their search for outfield upgrades. Taylor, hitting .264/.340/.385 and once again playing Gold Glove-caliber defense in center, would immediately become the best defensive outfielder on the Yankees’ roster (or on the roster of the majority of MLB teams). New York has been playing Aaron Judge in center field more than ever before, but Taylor could conceivably push Judge back to right field if and when the Yankees inevitably move on from Joey Gallo.

The Yankees are also known to be interested in Benintendi, and Kristie Ackert of the New York Daily News reported Sunday evening that the two sides have had “ongoing” talks regarding Benintendi for the past couple weeks. The asking price is believed to be high at present, Ackert adds. While the Yankees have now been linked to a pair of Kansas City outfielders, the Royals will surely receive interest in both Benintendi and Taylor from other clubs, just as New York will explore outfield options with other teams.

Further trades from the Royals aren’t necessarily a given. Picollo suggested that the team does not “feel the extreme need that we have to move any players,” though it’d be surprising if Benintendi, at the very least, didn’t change hands over the next three weeks. However, even if the Royals stand completely pat the rest of the way, Waters should get an earnest look in the big leagues before long, particularly with Kyle Isbel struggling and Edward Olivares only playing a limited role this year.