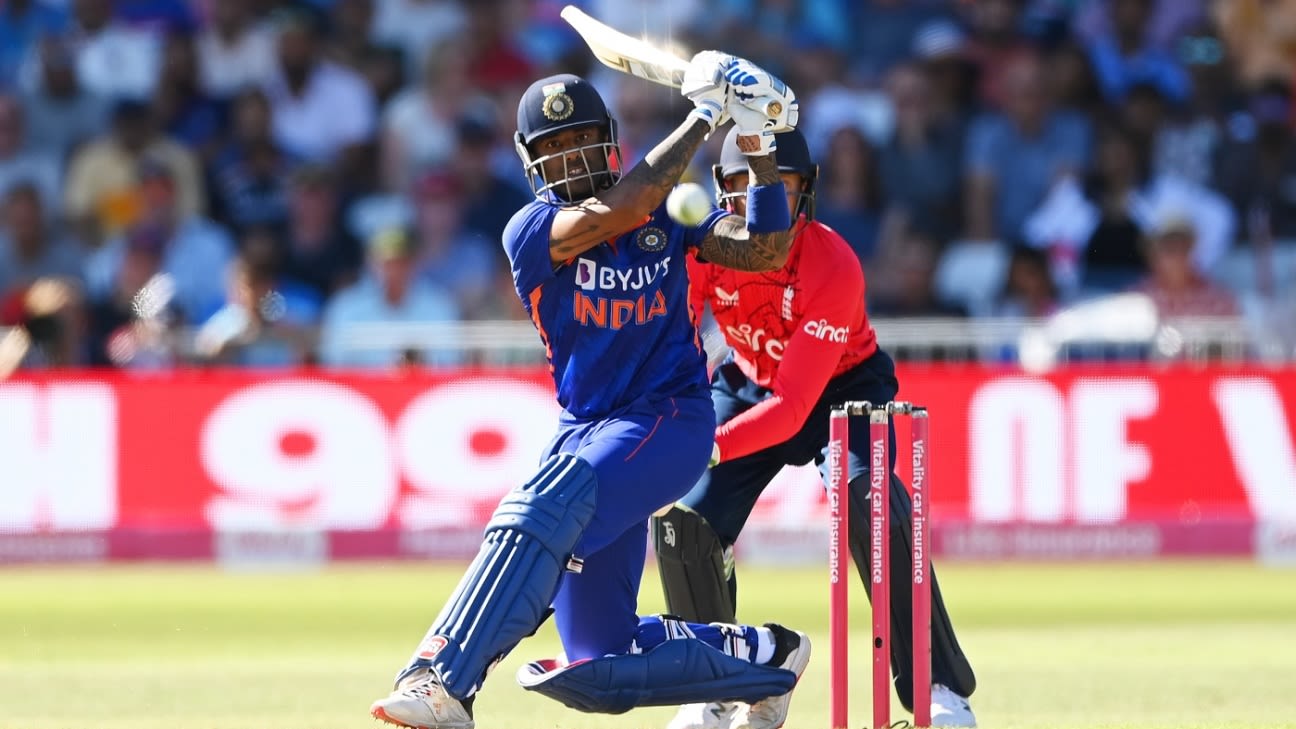 Before we knew physics, angles or athleticism, strength or fitness, most of us have visualized ourselves playing shots nobody plays to hit balls into areas nobody hits. Then we grew up and learned of the limitations physics and human strength impose on batting, of how well bowlers can make batters hit to spaces they have fielders in. Despite all the ramps, scoops and even the Ollie Pope sweep with his back foot in front of the front, we are aware of certain limitations to batting.
At Trent Bridge, Suryakumar Yadav was that child inside us, challenging the limitations we have learned to exist on batting. One of them is that you can’t hit a full ball on leg stump for a six behind point without getting into an unorthodox position. It is a fairly reasonable assumption. Except that Suryakumar made a little room, collapsed the back leg, scythed the ball with a face so open that only the trailing edge was visible from front-on, and used his wrists at an impossibly late moment to make sure it went away from that deep point fielder.
And it went deep into the stand. He had no business getting the elevation or the distance that he did. It was a ball that might have perhaps yorked him had Suryakumar played well forward. It was an almost perfectly executed delivery bowled to Chris Jordan’s field. Instead he created the time and the angle and whippage to send it over square third.
It was a shot that defied all we have learned. And yet it was not the only one. There was a similar six off Richard Gleeson, but, more mundanely, it went over cover-point. There was a sweep off David Willey early doors. The drive over extra cover to Jordan’s perfectly executed hard length was sensational. One short-of-a-length legbreak from Liam Livingstone landed over short fine leg.
All this done not in the nets or a lab but out there in the middle, in a chase of 216 in which nobody other than Suryakumar went past 28. He scored 117 off 55 balls in near-perfect fashion, playing only five false shots. In all T20 matches that we have control data for, there have been only five hundreds with fewer mistakes. Only three of those have had a strike-rate higher than 200.
This was an innings that challenged the whole idea of ​​batting. To manoeuvre the ball into vacant places – often behind square – you need to take risks. Rishabh Pant is another Indian batter who does it incredibly, but he takes risks for it. Suryakumar batted with the efficiency of someone coasting through the middle overs of an ODI but at a pace befitting a T20 at a ground that has made mockery of all standards of the pace of run-scoring.
Suryakumar’s captain, Rohit Sharma, was left in awe of what he saw. “One of the best in the T20s that I’ve seen,” Rohit said of Suryakumar’s innings. “Especially when you’re chasing a score like that and you come out and bat the way he did shows the quality of the batsman. We were three down and we wanted to dig in, get that partnership going and bat as long as possible.

“He pretty much did everything right today. Just that, I’m pretty sure he’s slightly disappointed that he couldn’t be there right till the end, but taking nothing away from that kind of knock. You don’t get to see that every day. So we will take that with both hands as a team and pretty sure he will be very happy with how he responded to that situation. We know the quality of him. manoeuvring the field, playing all sides of the ground. It’s a very rare quality that a batter can have and Surya definitely has all of that.”

In the end, in the face of nearly insurmountable asking rate, Suryakumar tried one improbable shot too many. With 40 required off the last two overs and with no specialist batter left for company, Moeen Ali kept trying to hide the ball wide outside off and just short of a length. The shots that are logically on for these deliveries get you one, two or four in the arc from extra cover to square third, but looking for a six, Surya tried to muscle the ball down the ground. He had neither the length nor the pace to work with, but by the end of it he had dispelled any doubts there might have been on who should be the first name in the middle order come the T20 World Cup in Australia.

It was a bonus that it was an innings of such high quality that it left the whole ground on its feet, and reintroduced us to the child in us who used to day-dream of playing shots that nobody else tried (for good reason).