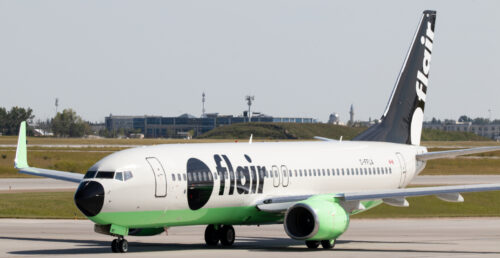 At this point, canceled flights are the norm for travelers.

Airport chaos is showing no sign of simmering down, whether you’re flying out of Toronto Pearson Airport, Vancouver International Airport, or elsewhere. After all, Canada does have the worst flight delays in the world.

For one couple, chaos erupted while in Saskatoon on their way home from vacation. In an email, Hunter Hillbom — a full-time nanny living in Vancouver — tells Daily Hive she and her partner only found out their July 6 flight with Flair was canceled when they arrived at the check-in counter.

This was their first time flying with the low-cost Canadian airline. Hillbom says they checked in online in the morning and arrived at the airport at 6 pm, three hours before boarding.

“We had walked through the doors straight to the counter where there wasn’t a worker in sight. We were double-checking our phones to make sure we even read the time right,” she says.

When the pair finally spotted a Flair employee, they asked for help but didn’t get the response they were hoping for.

“The employee said ‘Oh, you didn’t see? Your flight has been cancelled. So sorry, but I have to run!’ and – no exaggeration – jogged away from us,” Hillbom says.

The two checked their phones and saw that their return flights had been changed to July 13, an entire week later. They then sat in the airport for two hours on hold with Flair, and shared the unfortunate news with other passengers who arrived at check-in.

Hillbom also aired her frustrations in a TikTok video that now has over 242K views.

and there is no one here to talk to 🙂 #flairairlines

“I asked if [Flair] would compensate us for booking a new flight, or work missed, and they said the most they could do was a possible hotel voucher that would appear in three to five hours,” Hillbom says, adding the cost of the return flight was $213.

The pair needed to be back in Vancouver ASAP for work. Having no other options left, Hillbom says they each spent $750 on a WestJet flight home.

“I understand it is a tough time to be an airline, but the unprofessionalism of the staff we had dealt with and the uncertainty of your flight [being delayed] It just doesn’t feel worth it,” she says. “I hope anyone who is booked with Flair has a good experience, but is also prepared to be spend over triple the fare price with a different airline to get home.”

Daily Hive has reached out to Flair Airlines for additional comment but has yet to get a response.