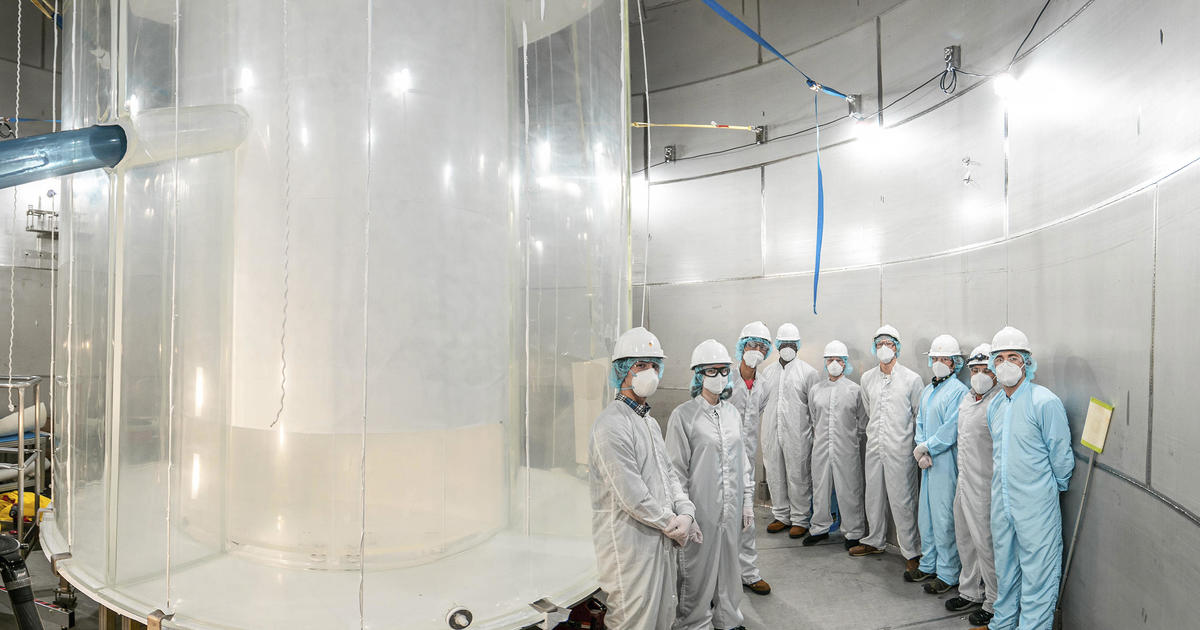 In a former gold mine a mile underground, inside a titanium tank filled with a rare liquified gas, scientists have begun the search for what so far has been unfindable: dark matter.

Scientists are pretty sure the invisible stuff makes up most of the universe’s mass and say we wouldn’t be here without it — but they don’t know what it is. The race to solve this enormous mystery has brought one team to the depths under Lead, South Dakota.

The question for scientists is basic, says Kevin Lesko, a physicist at Lawrence Berkeley National Laboratory. “What is this great place I live in? Right now, 95% of it is a mystery.”

The idea is that a mile of dirt and rock, a giant tank, a second tank and the purest titanium in the world will block nearly all the cosmic rays and particles that zip around — and through — all of us every day. But dark matter particles, scientists think, can avoid all those obstacles. They hope one will fly into the vat of liquid xenon in the inner tank and smash into a xenon nucleus like two balls in a game of pool, revealing its existence in a flash of light seen by a device called “the time projection chamber.”

Scientists announced Thursday that the five-year, $60 million search finally got underway two months ago after a delay caused by the COVID-19 pandemic. So far the device has found … nothing. At least no dark matter.

That’s OK, they say. The equipment appears to be working to filter out most of the background radiation they hoped to block. “To search for this very rare type of interaction, job number one is to first get rid of all of the ordinary sources of radiation, which would overwhelm the experiment,” said University of Maryland physicist Carter Hall.

And if all their calculations and theories are right, they figure they’ll see only a couple fleeting signs of dark matter a year. The team of 250 scientists estimates they’ll get 20 times more data over the next couple of years.

By the time the experiment finishes, the chance of finding dark matter with this device is “probably less than 50% but more than 10%,” said Hugh Lippincott, a physicist and spokesman for the experiment in a Thursday news conference.

While that’s far from a sure thing, “you need a little enthusiasm,” Lawrence Berkeley’s Lesko said. “You don’t go into rare search physics without some hope of finding something.”

Two hulking Depression-era hoists run an elevator that brings scientists to what’s called the LUX-ZEPLIN experiment in the Sanford Underground Research Facility. A 10-minute descent ends in a tunnel with cool-to-the-touch walls lined with netting. But the old, musty mine soon leads to a high-tech lab where dirt and contamination is the enemy. Helmets are exchanged for new cleaner ones and a double layer of baby blue booties go over steel-toed safety boots.

The heart of the experiment is the giant tank called the cryostat, lead engineer Jeff Cherwinka said in a December 2019 tour before the device was closed and filled. He described it as “like a thermos” made of “perhaps the purest titanium in the world” designed to keep the liquid xenon cold and keep background radiation at a minimum.

Xenon is special, explained experiment physics coordinator Aaron Manalaysay, because it allows researchers to see if a collision is with one of its electrons or with its nucleus. If something hits the nucleus, it is more likely to be the dark matter that everyone is looking for, he said.

These scientists tried a similar, smaller experiment here years ago. After coming up empty, they figured they had to go much bigger. Another large-scale experiment is underway in Italy run by a rival team, but no results have been announced so far.

The scientists are trying to understand why the universe is not what it seems.

One part of the mystery is dark matter, which has by far most of the mass in the cosmos. Astronomers know it’s there because when they measure the stars and other regular matter in galaxies, they find that there is not nearly enough gravity to hold these clusters together. If nothing else was out there, galaxies would be “quickly flying apart,” Manalaysay said.

“It is essentially impossible to understand our observation of history, of the evolutionary cosmos without dark matter,” Manalaysay said.

Lippincott, a University of California, Santa Barbara, physicist, said “we would not be here without dark matter.”

So while there’s a little doubt that dark matter exists, there’s lots of doubt about what it is. The leading theory is that it involves things called WIMPs — weakly interacting massive particles.

If that’s the case, LUX-ZEPLIN could be able to detect them. We want to find “where the wimps can be hiding,” Lippincott said.