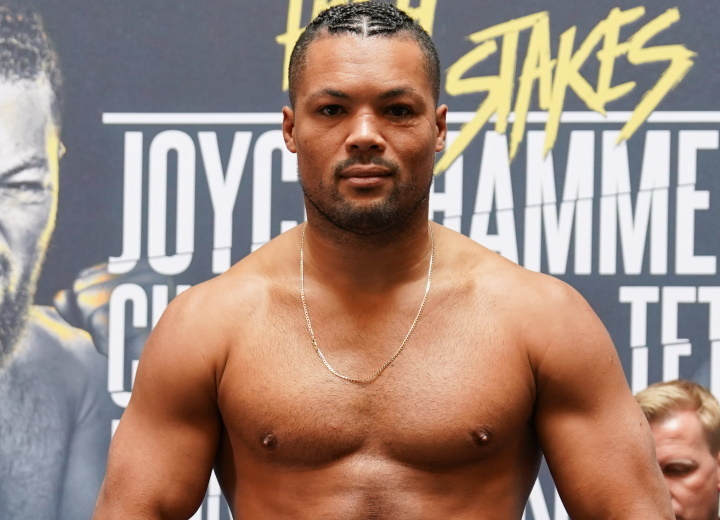 Joe Joyce did what Joe Joyce does as he battered Christian Hammer into submission in four rounds at Wembley Arena to stay on track for a world heavyweight title shot.

Hammer certainly took his blows, going down four times, but he landed some big punches too. The difference was, as Joyce’s opponents have found before, you can land your best punches and he will walk through them.

It had been nearly a year since Joyce had been in the ring, a combination of injury and waiting to see if he would get a vacant or interim world title shot.

In the first 30 seconds a left hook seemed to hurt Hammer, who was then covering up on the ropes. But Hammer was soon coming forward and landed a huge right that Joyce just shrugged off. Another two big shots were landed by Hammer, it was the German-Romanian who looked more bothered when Joyce landed a cuffing punch.

Hammer finished the second round looking tired after a round of pressure from Joyce. While Joyce sometimes looks like he is boxing in slow-motion, he is effective.

Things started to go downhill for Hammer in the third as he was rocked by a right hook and shook his head, rather giving the game away. Joyce piled forward throwing punches, but Hammer gritted it out. Another right had him in trouble again and at the end of the round and then a left to body, followed by a left hook sent Hammer to the canvas on one knee as the bell sounded.

Early in the fourth round, another right to the body dropped Hammer again. He beat the count and came out swinging haymakers, which did actually land, but two clubbing rights sent Hammer down again. He would have been well within his rights to call it a day then, but on he went, until another body shot dropped him for a fourth time, prompting referee Victor Loughlin to wave it off at 1:20 of the round.

Ron Lewis is a senior writer for BoxingScene. He was Boxing Correspondent for The Times, where he worked from 2001-2019 – covering four Olympic Games and numerous world title fights across the globe. He has written about boxing for a wide variety of publications worldwide since the 1980s.