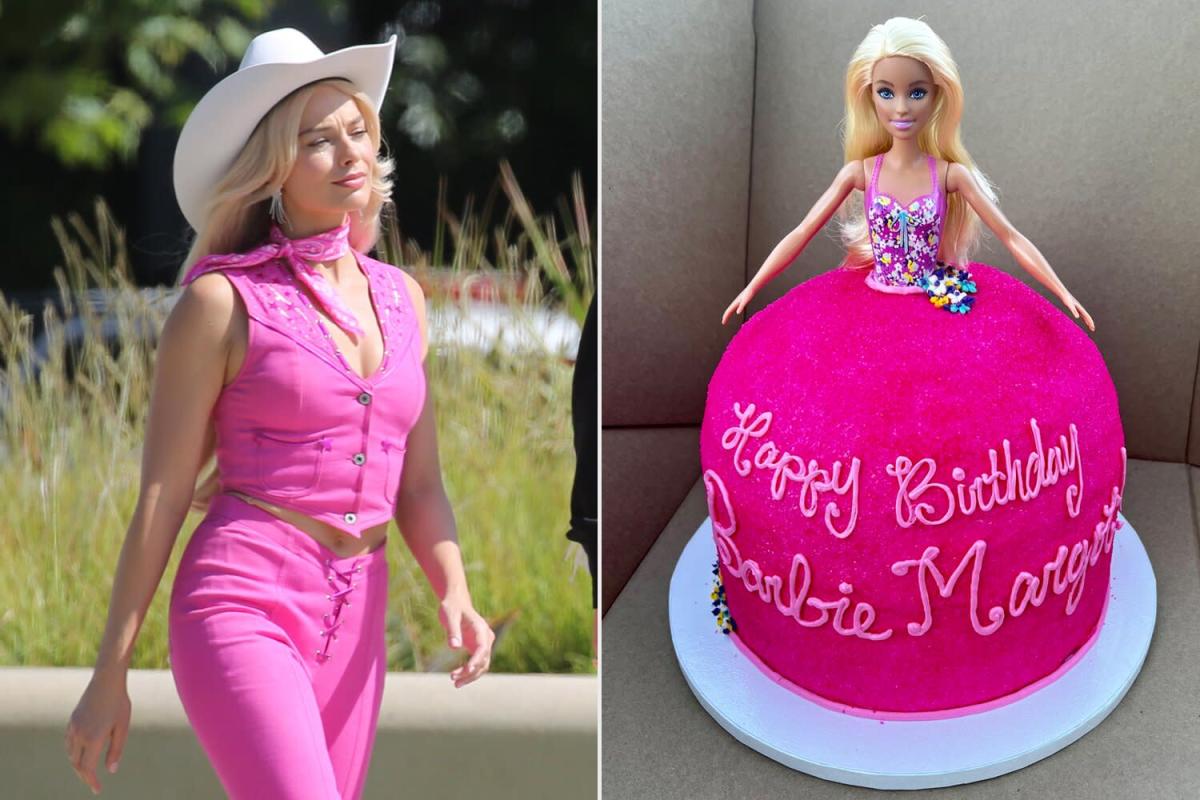 Margot Robbie had every girl’s dream birthday this year.

The Academy Award nominee rang in her 32nd birthday Saturday on the set of Greta Gerwig’s Barbie movie, where she was treated to a big pink Barbie doll cake with “Happy Birthday Barbie Margot!” written in icing letters.

She was also seen walking on set with a big pink box of Trejo’s Donuts under her arm and a pointed party hat dangling from her finger.

RELATED: Every Photo From the Barbie Movie Starring Margot Robbie and Ryan Gosling

In addition to returning to her pink cowgirl outfit, Robbie was also seen rocking her neon rollerblading look once again with costar Ryan Gosling, who plays Ken in the movie. She wore a men’s white dress shirt over the costume.

Robbie and Gosling, 41, were previously seen rollerblading in Venice Beach while shooting a scene with Will Ferrell, who plays the CEO of a toy company (possibly Barbie owner Mattel), according to The Hollywood Reporter.

The movie follows the beloved doll after she “gets kicked out of Barbieland because she’s not perfect enough, a bit eccentric and doesn’t fit in. She then goes on an adventure in the real world and by the time she returns to Barbieland to save it, she has gained the realization that perfection comes on the inside, not the outside.” Barbie also learns that the “key to happiness is belief in oneself, free of the obligations to adhere to some unattainable standard of perfection,” according to an early plot description published by Deadline.

America Ferrera, Simu Liu, Issa Rae, Michael Cera and Kate McKinnon have also joined the cast after Gerwig, 38, was tapped to direct the film last year from a screenplay by herself and partner Noah Baumbach. Robbie also serves as a producer through her LuckyChap banner.

Robbie teased the film back in 2020, telling The Hollywood Reporter “Whatever you’re thinking, it’s not that,” after she took on the coveted role in early 2019.

“We like the things that feel a little left off center,” she said. “Something like Barbie where the IP, the name itself, people immediately have an idea of, ‘Oh, Margot is playing Barbie, I know what that is,’ but our goal is to be like, ‘Whatever you’re thinking, we ‘re going to give you something totally different — the thing you didn’t know you wanted.’

“Now, can we truly honor the IP and the fan base and also surprise people? Because if we can do all that and provoke a thoughtful conversation, then we’re really firing on all cylinders,” Robbie added.

The Australian actress previously expressed excitement about the role to PEOPLE. “I think it’s a great opportunity to put some positivity out in the world and a chance to be aspirational for younger kids,” she said.