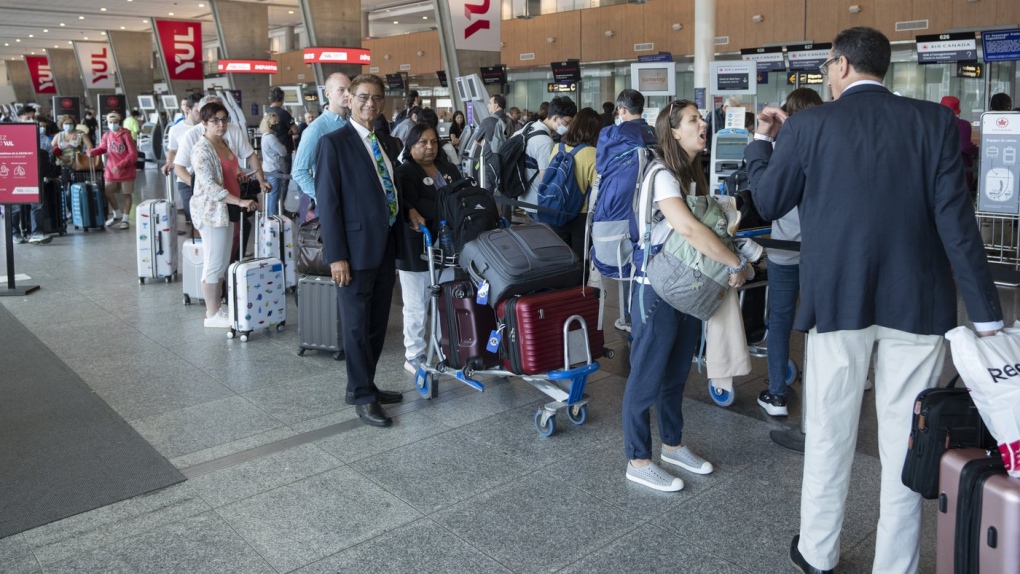 Most Canadians believe the country is in a recession and that prices are going to continue to rise for the foreseeable future, according to a new poll.

A wide-ranging survey by Leger asked Canadians and Americans about issues including travel plans, airport delays and inflation.

More than 80 per cent of Canadian respondents said they believe prices will keep going up, and 59 per cent say they think Canada is in an economic recession.

“It’s sort of a proxy question for how you feel about the economy,” he said.

“Between that and the rising inflation and the tightening of household budgets, that probably is not going to be something that’s going to encourage much consumer spending.”

The online survey was completed by 1,538 Canadians and 1,002 Americans between July 8 and 10. It cannot be assigned a margin of error because online polls are not considered truly random samples.

A similarly small proportion, four per cent, said they weren’t aware of long lineups and delays in getting passports — likely evidence of how prominent both issues have been in the news in recent months.

Despite the many news stories about passport delays, less than half of Canadians polled said they were concerned about the issue, while 50 per cent said it’s not concerning.

“I think to be really sort of seized by that issue, you have to either have a trip coming up and probably passport also need to be looking at your expiration date,” Enns said.

More than half of Canadians who took the survey said they plan to travel within their own province, and another 28 per cent said they will travel within Canada. Just over a quarter said they’ll be heading abroad, with 16 per cent of travelers going to the US

American respondents weren’t asked about the passport issue, but 45 per cent of them said they were concerned about travel issues. Another 13 per cent said they weren’t aware of the problem.

Just 18 per cent said that’s caused them to significantly change their vacation plans. People under 35 were more likely to say they’re changing their plans, and also more likely to be planning to travel overseas.

Enns said that number — nearly one in five — won’t sit well with the tourism sector.

“If you’re the tourism operator, running the bed and breakfast or the resorts, and finally we’ve got our first summer where we’re free and clear of COVID, you probably aren’t thrilled to see some of these stories, he said.

There seems to be general agreement about what the problem is, with 68 per cent of Canadians and 54 per cent of Americans saying they think staffing shortages are to blame.

A similar proportion — 18 per cent in Canada and 17 per cent in the US — laid the blame on government COVID-19 restrictions.


This report by The Canadian Press was first published July 12, 2022.