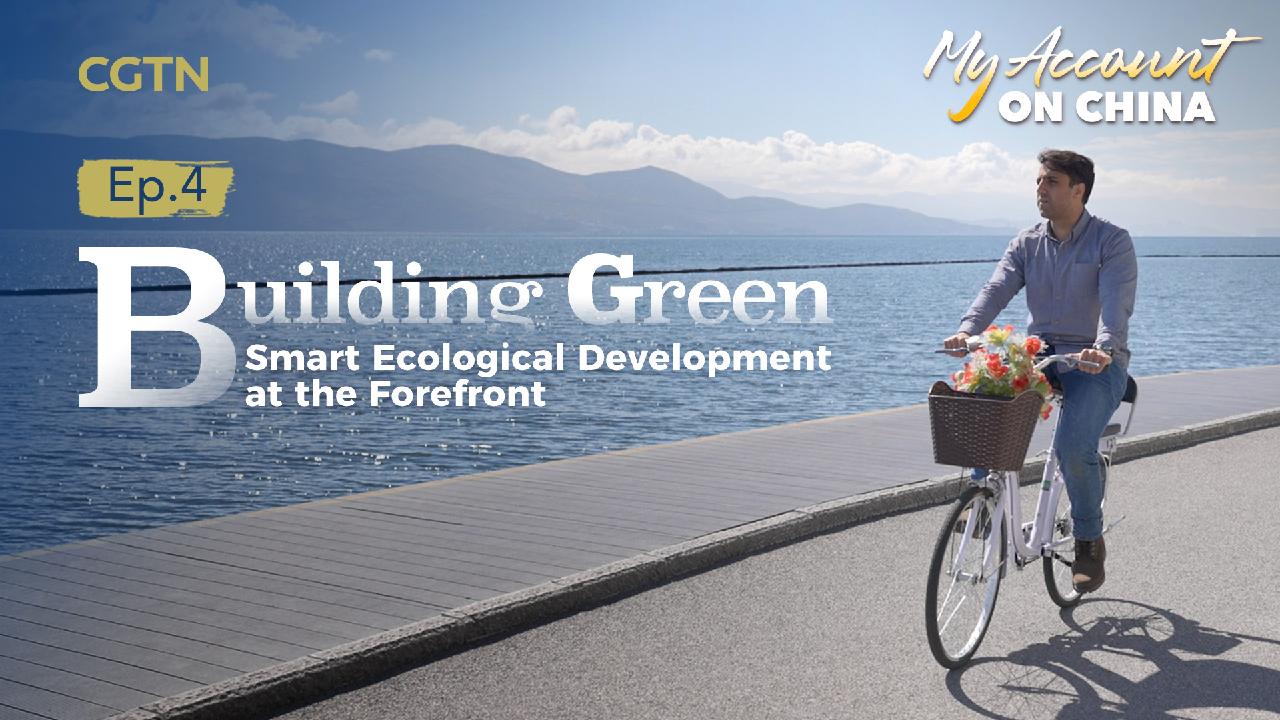 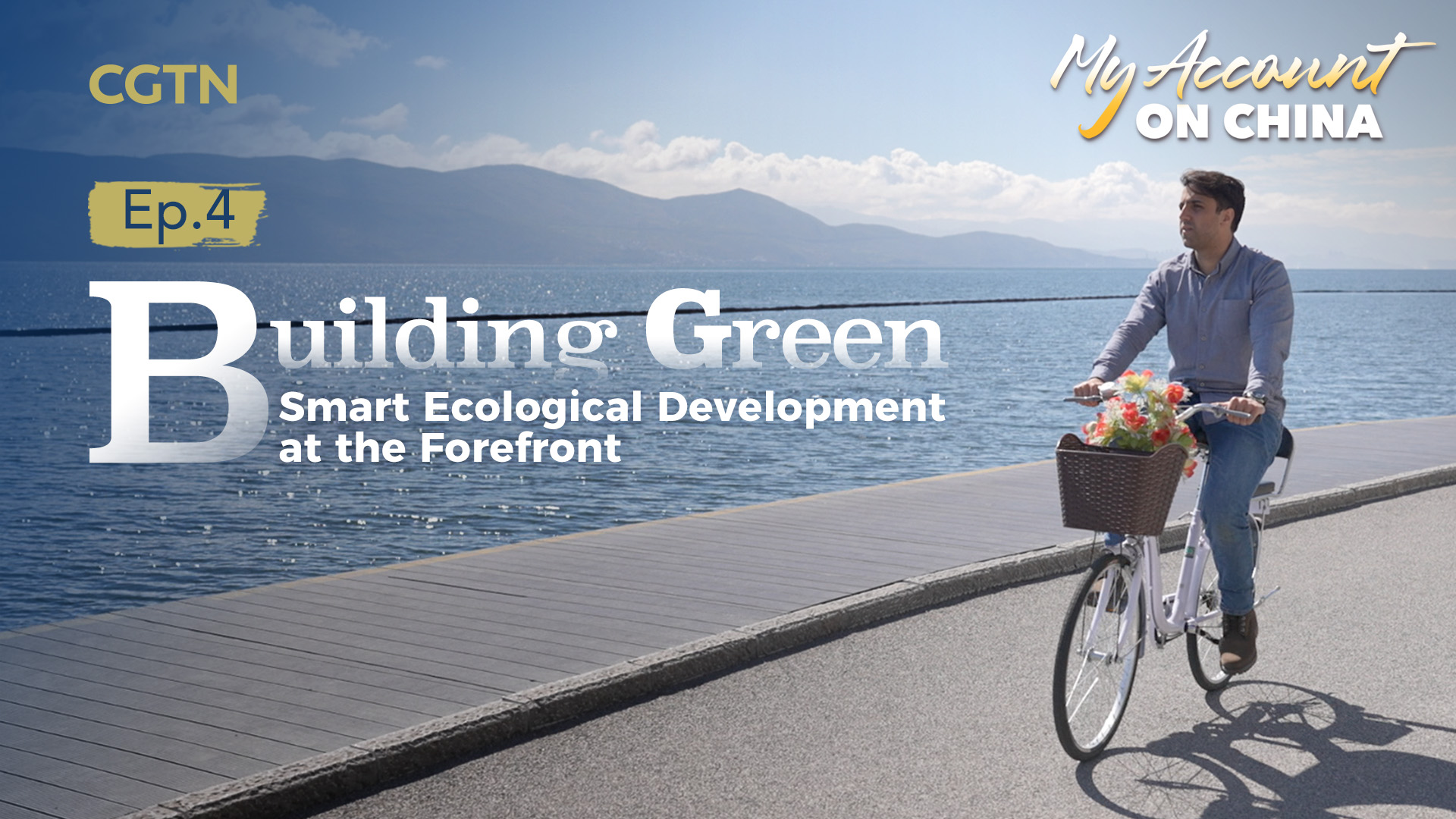 By now much of the world and specifically those that follow Asia-Pacific and China current affairs, are aware of China’s ambitions to clean up its environment, and cut back on forms of energy that are polluting or not considered to be clean. The country for the past decade or so has made those commitments quite clear, being vocal about its shift away from coal, carbon emission targets and much more.

But what’s that look like in practical terms? How does one gauge such a multitude of factors that would determine if or not the environment is improving?

A part of my recent two-month long trip was focusing on exactly that – the achievements the country has made in terms of meeting previously set policies, and what’s next, how much more is there to be done.

I began in southwest China, in the tourist town of Dali. 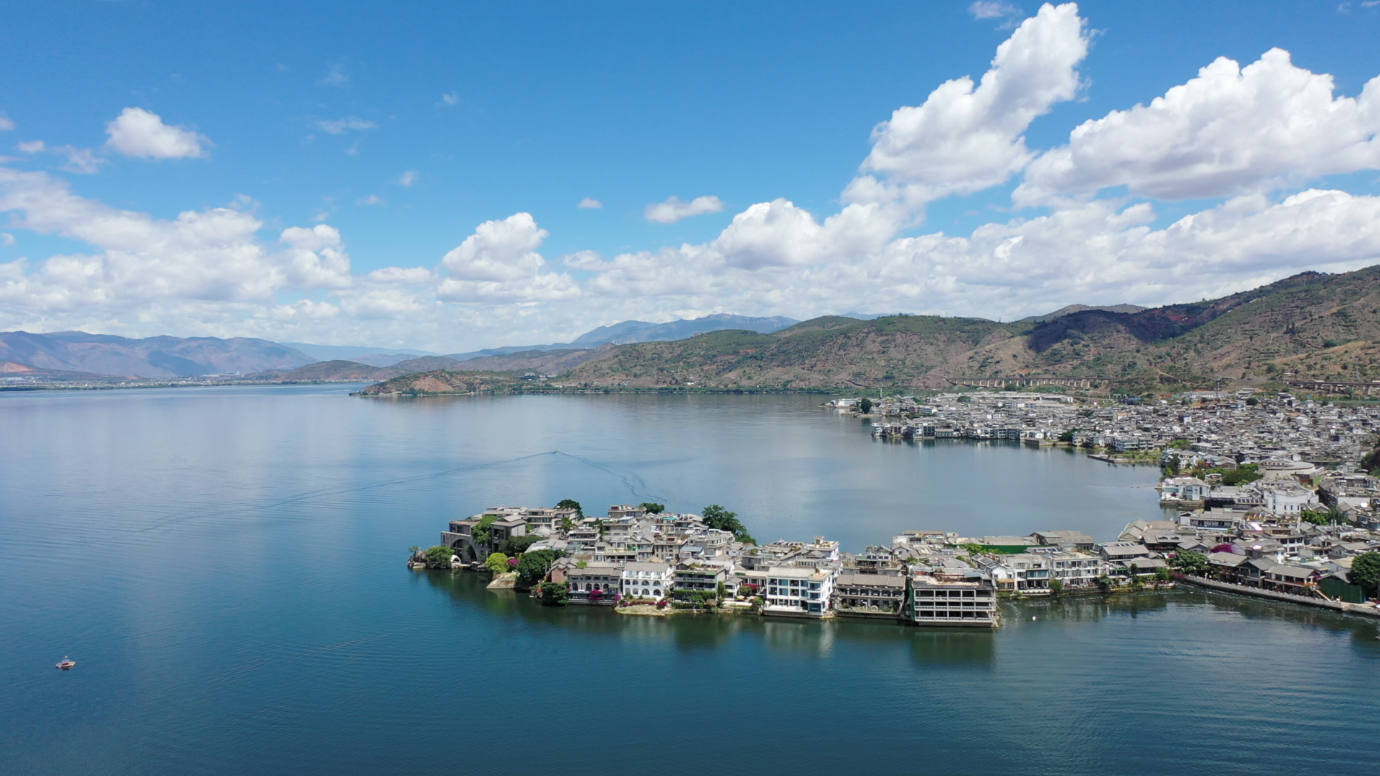 It’s a getaway town which for the past few decades has relied so much on the tourism industry and its iconic Erhai Lake, that one would be concerned if any major sweeping policies were brought into place, that the town’s landscape would change, places would close and the quaint town would lose its luster.

And that actually did happen years ago.

Speaking with 55-year old Dali-native He Licheng, someone I spent several days with learning about his business shortcomings and failures, he was quite honest about how Erhai Lake played such a major impact on people’s livelihoods, and still does to this very day . 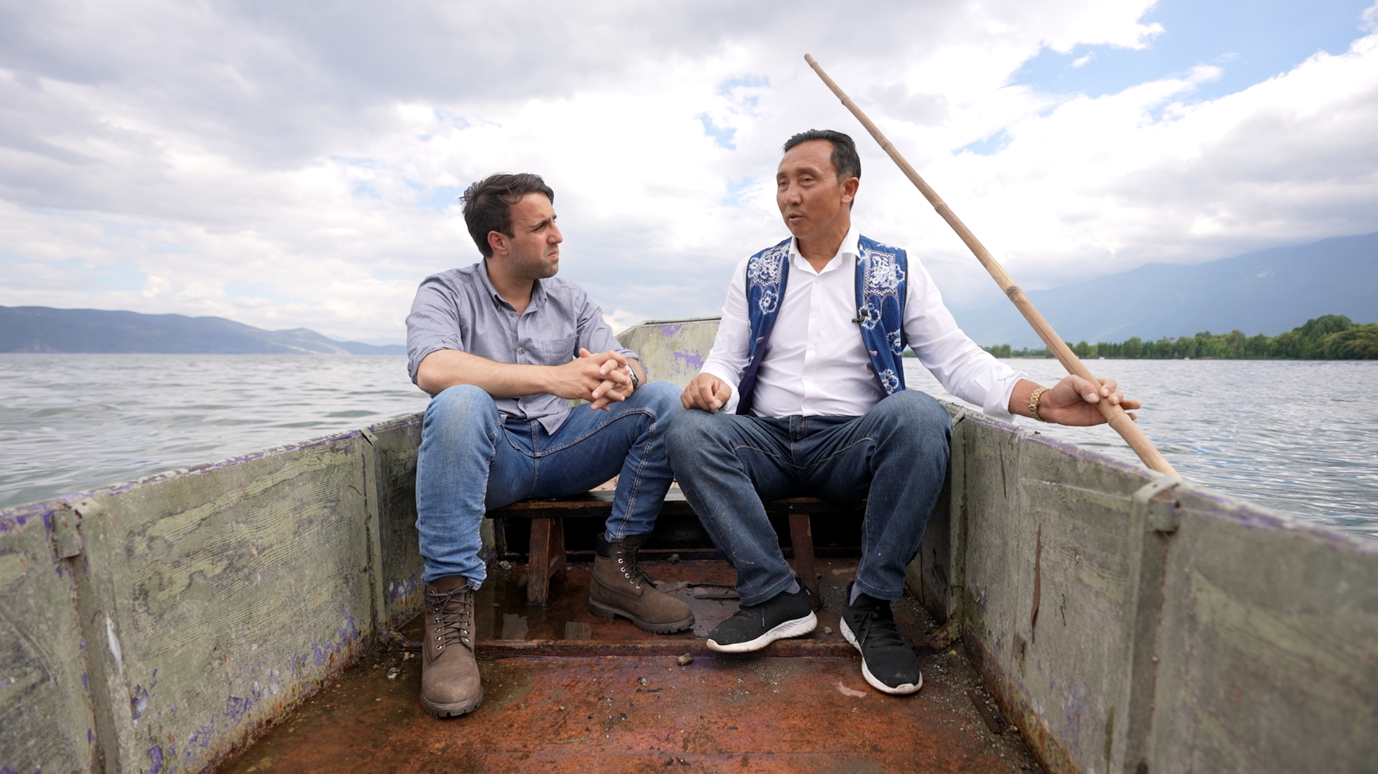 CGTN’s Omar Khan (L) speaks with Dali-native He Licheng (R) on the changes he’s witness in his hometown. /CGTN

CGTN’s Omar Khan (L) speaks with Dali-native He Licheng (R) on the changes he’s witness in his hometown. /CGTN

For more than 30 years, the local government has gone through phases of implementing policies met to curb the spread of algae and other pollutants in the lake’s waters. He says that the phased policies draw a parallel with residents’ local businesses.

With stringent policies, came closures and a loss of revenue. He’s fishing boat, fishing pond, homestay… they were all leased back to the town. Even parts of his homestay were demolished for space to build an ecological corridor along the shorelines of Erhai.

Admittedly, this didn’t sit well with He, telling me he and his family needed time to understand why this was happening, why these policies were brought into place. After all, he was losing money and was struggling to come to terms with the ups and downs of his hometown.

Years ago, Chinese President, Xi Jinping visited the town, specifically touring parts of the lake and meeting He. It came at a time when more was being done to clean up the lake and bring back its lucid and clean water. 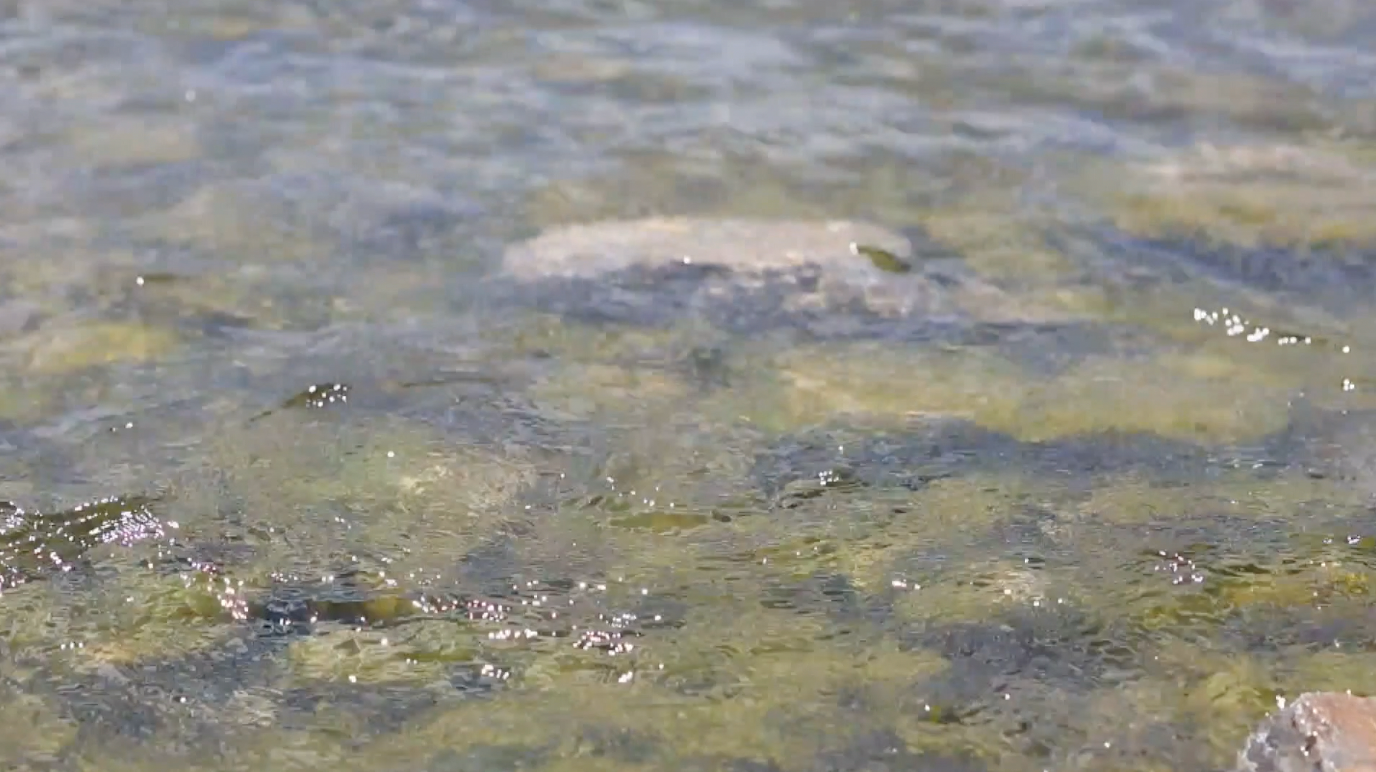 The lake’s waters have seen a much needed improvement, with new water treatment facilities helping with algae. /CGTN

The lake’s waters have seen a much needed improvement, with new water treatment facilities helping with algae. /CGTN

Having spoken with the President and learning about what was being done to protect the lake, He had a change of heart. He began to realize that the lake was no longer the lucid waters he swam in as a young kid. Tourism indeed brought growth and money, but it brought along impacts that ultimately affect the local ecosystem.

It was a three-decade long learning experience for He and the vast majority of the town’s residents. Many of them now are continuing with their business and pursuing other avenues of greener tourism services. For He, he’s turned to growing rice and oil seeds and selling them nationwide. 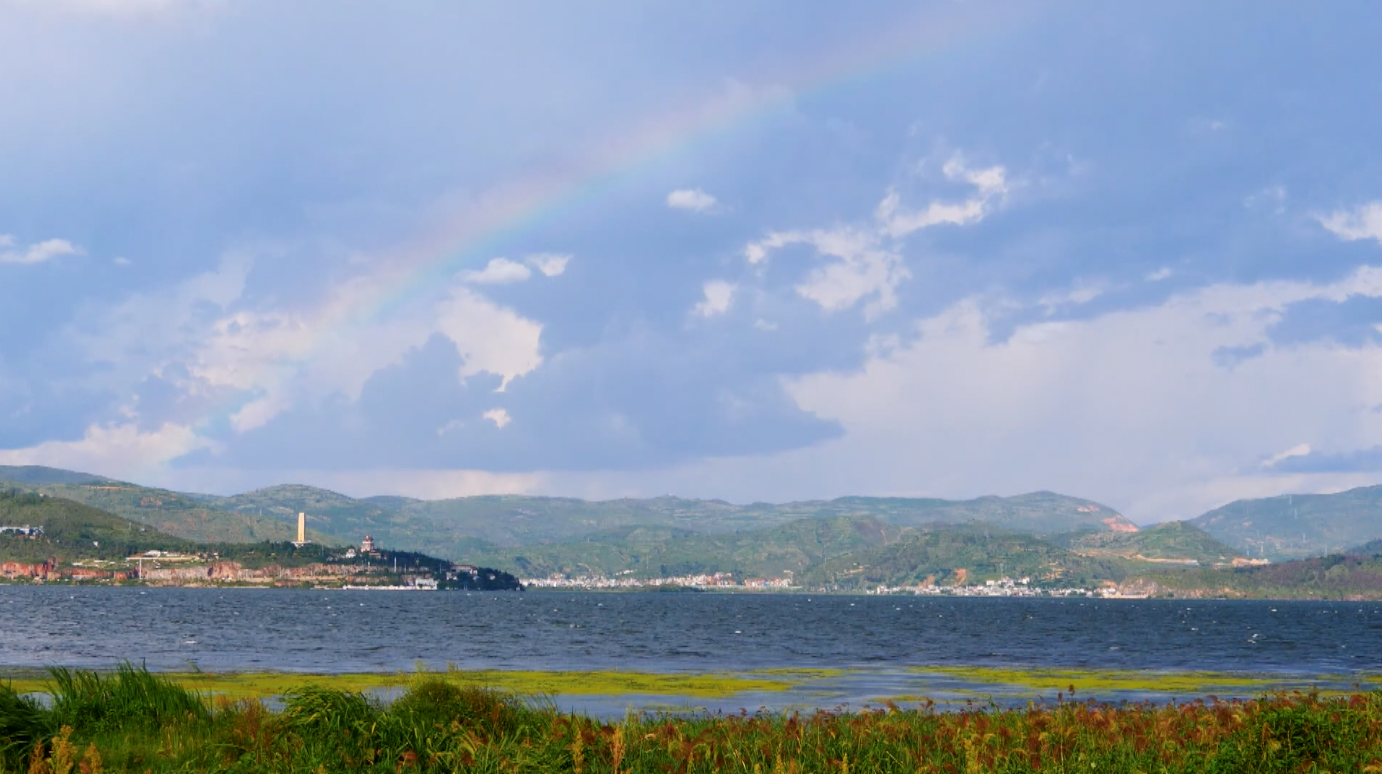 A rainbow defines the Dali sky on a clear summer day. /CGTN

A rainbow defines the Dali sky on a clear summer day. /CGTN

And if it wasn’t for the now cleaner waters of Erhai, than the very soil he’s growing his crops on would most likely never grow or even see the light of day.

My environmental journey did not stop there however.

From the humid and tropical landscape of Yunnan, I headed to the arid northwest, visiting the Babusha Desert in Gansu.

Guo Wangang (L) shows the parts of the Babusha Desert he wishes to bring greenery to. /CGTN

Guo Wangang (L) shows the parts of the Babusha Desert he wishes to bring greenery to. /CGTN

There I met with a multi-generational group of people, farmers and locals, that had dedicated their entire lives to preventing the further spread of the desert. 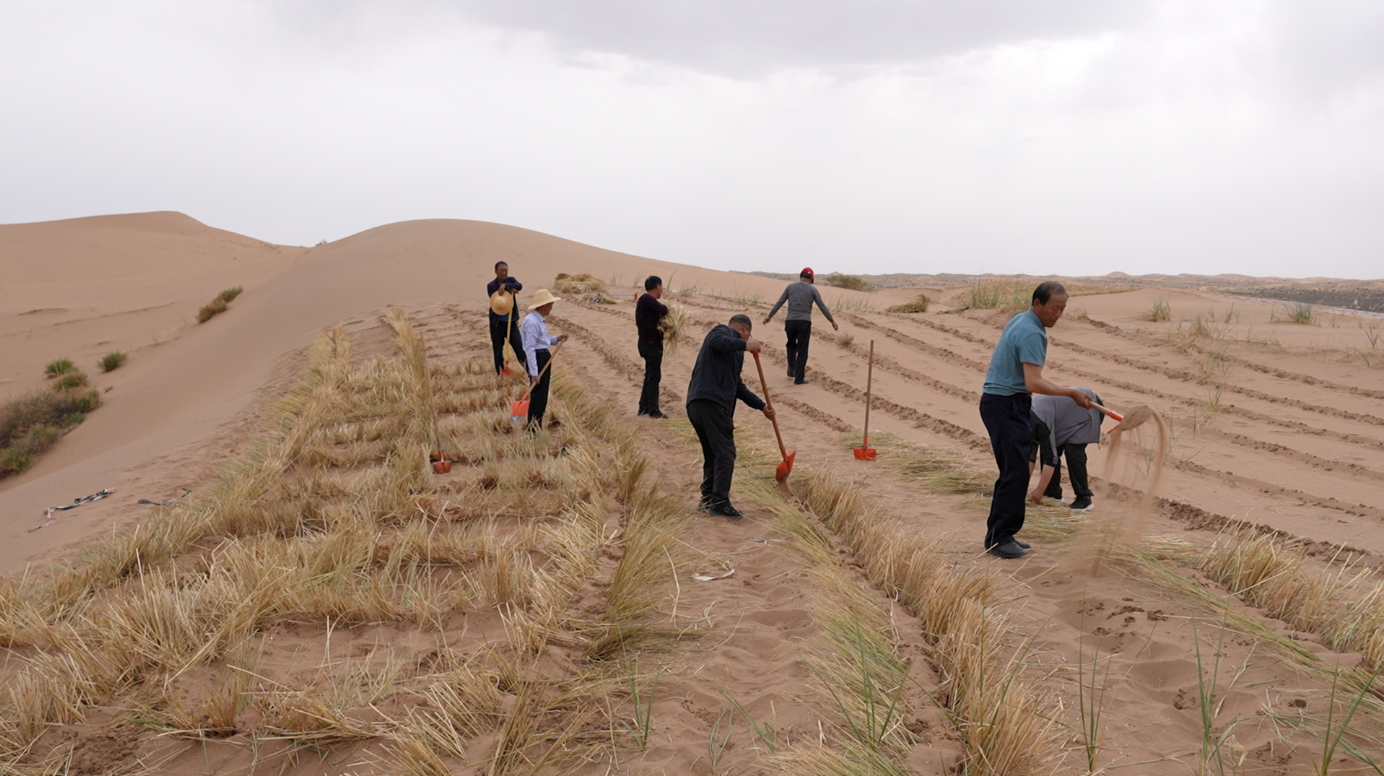 Guo Wangang and local farmers laying down straw grids to prevent the sand from kicking up and spreading. /CGTN

Guo Wangang and local farmers laying down straw grids to prevent the sand from kicking up and spreading. /CGTN

Anti-desertification efforts have been in full swing here for four decades, spearheaded by those known as the Six Old Men.

They were the trailblazers that first started planting trees across parts of the Babusha desert stretch of sand dunes that had long caused sand storms and impacted farmers’ crops.

I met with Zhang Runyuan, one of the Six Old Men, now retired and happily enjoying his old-age days. He tells me about what triggered their sudden drive to push back the desert. 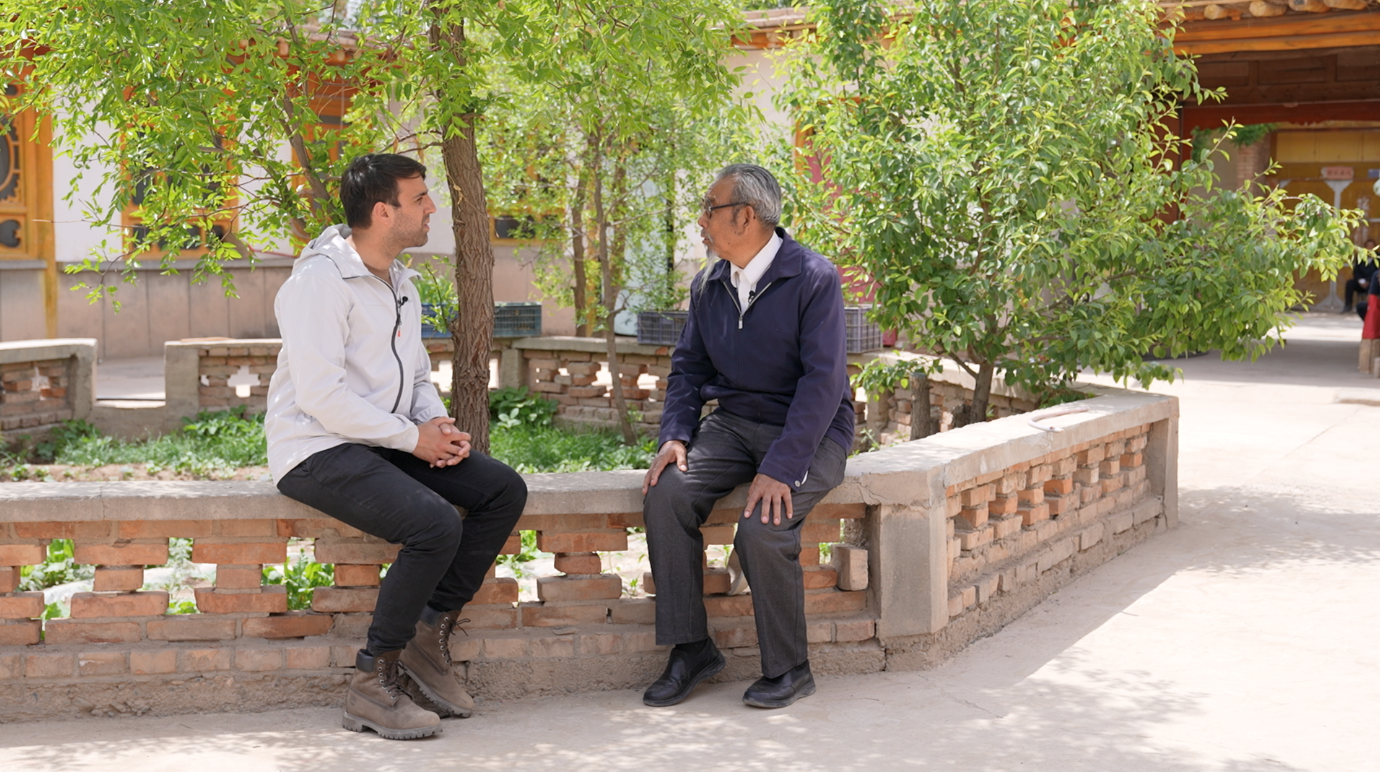 Zhang Runyuan (R), one of the original Six Old Men reflects on his past and what they’ve accomplished. /CGTN

Zhang Runyuan (R), one of the original Six Old Men reflects on his past and what they’ve accomplished. /CGTN

It happened when one of his friends was buried in a shelter following a sandstorm. Zhang and others had to dig him out, frantically trying to save their friend. When he was found, the man screamed that he had enough of the desert, and it was time they did something. 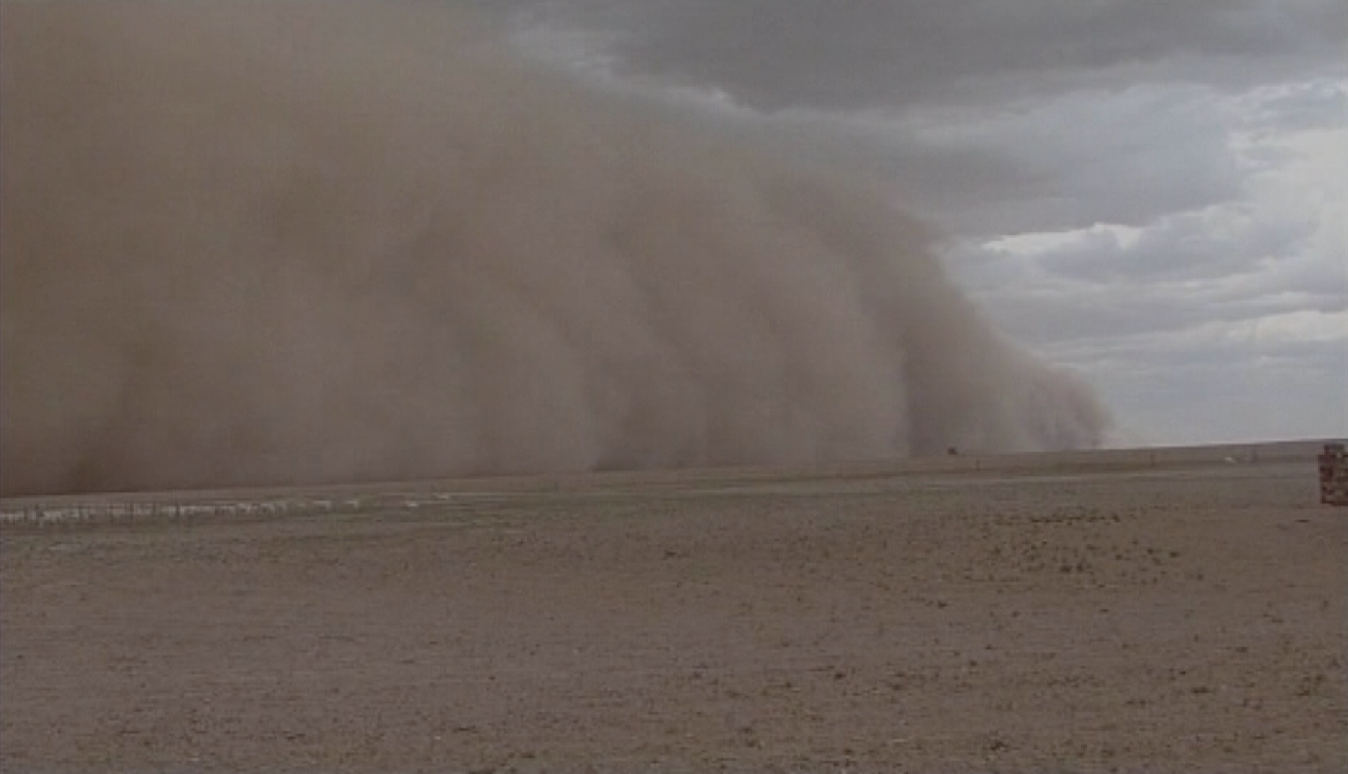 A sandstorm moves across the Babusha Desert. /CGTN

A sandstorm moves across the Babusha Desert. /CGTN

For me, I’ve never really thought that mankind can go head-to-head with mother nature, questioning its brute force. But the folks I met here in Gansu, for them it’s not fighting back, it’s more about protecting themselves and loved ones.

And by the turn of the century, the Six Old Men and future generations were responsible for planting more than 10 million trees across 50 square kilometers of desert.

Fast forwarding to 2019, Chinese President Xi Jinping came to Babusha Desert, recognizing the generations of farmers for their selfless efforts. There on that day was Guo Wangang and his son Guo Xi.

To this very day Guo Wangang still heads to the sand dunes alongside a team of farmers, tirelessly planting away, laying down sticks and branches to prevent the displacement of sand. 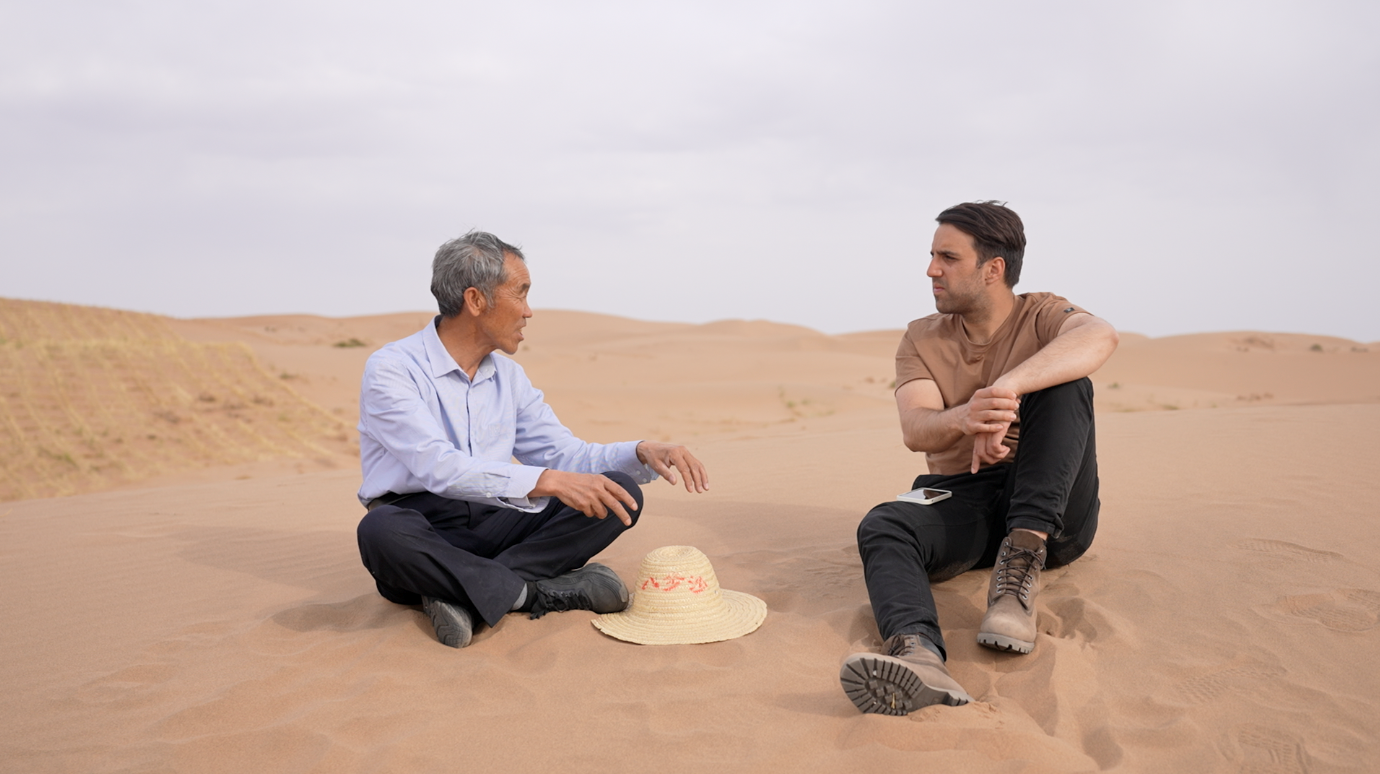 The day I met him I also got my hands messy, ploughing away in the desert heat with literally no sign of civilization in sight.

As for the younger Guo Xi, the decades’ long efforts that have taken place here in Gansu, have pushed his entrepreneurial spirit. For the youngster, more vegetation has allowed for farm and chicken farming to expand, while certain species of flowers and trees are also become pillars of what is known as the “sand economy.”

A week in Gansu, I’ve seen how farmers here have made the desert their life, even though it’s the exact cause of some of their hardship. And yes, of course there’s the instinctive response to ask, “why don’t these people just move elsewhere?” But say that to any local community anywhere in the world, it’s a lot easier said than done.

Dali and the Babusha Desert, two uniquely different places, with different identities and surely different futures. But the constant was the people that I met there, who shockingly were so committed to their environment and the impacts their communities had on it. 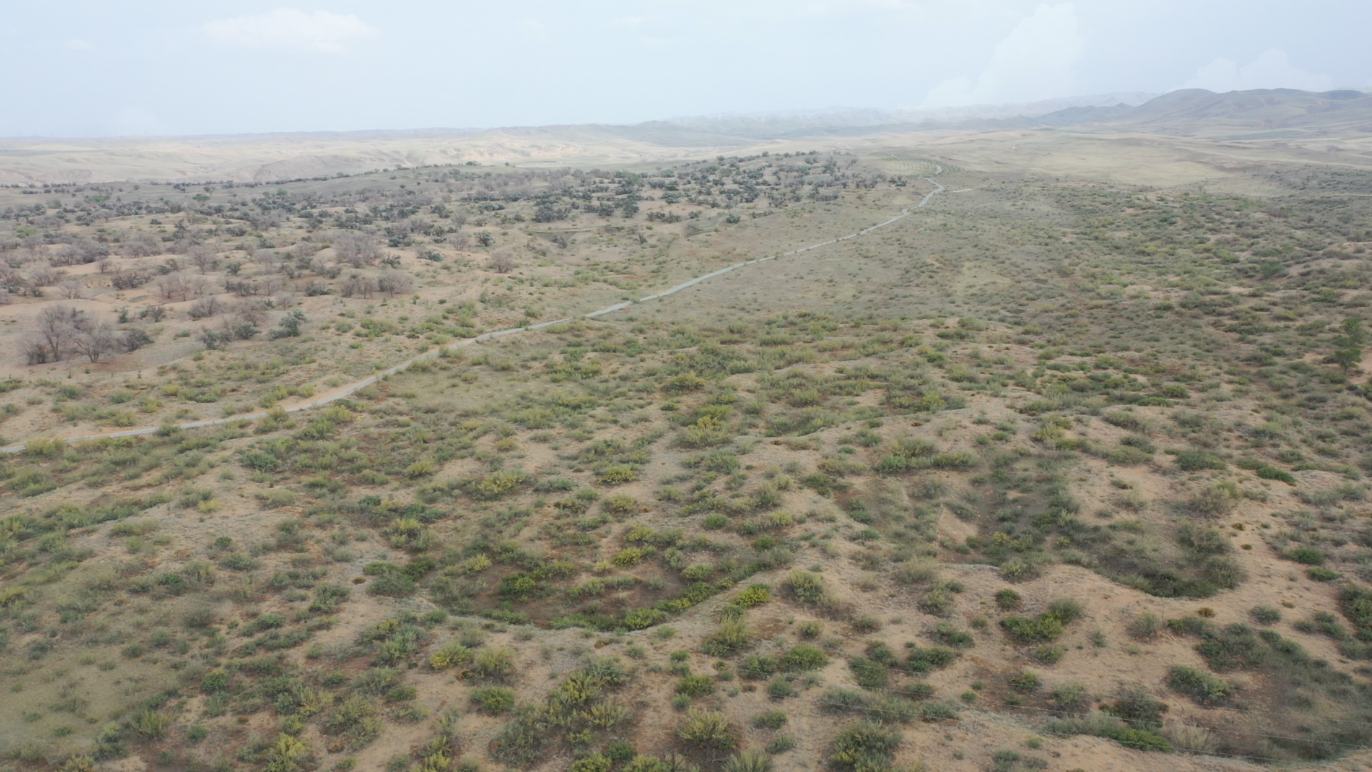 An aerial shot of the plants, shrubs and trees that have been planted by generations of farmers. /CGTN

An aerial shot of the plants, shrubs and trees that have been planted by generations of farmers. /CGTN

Maybe it’s rare to still see these sorts of collective approaches taken by local people, but it’s without question something we can learn from and take an initiative on in our homes, neighborhoods and places of living.