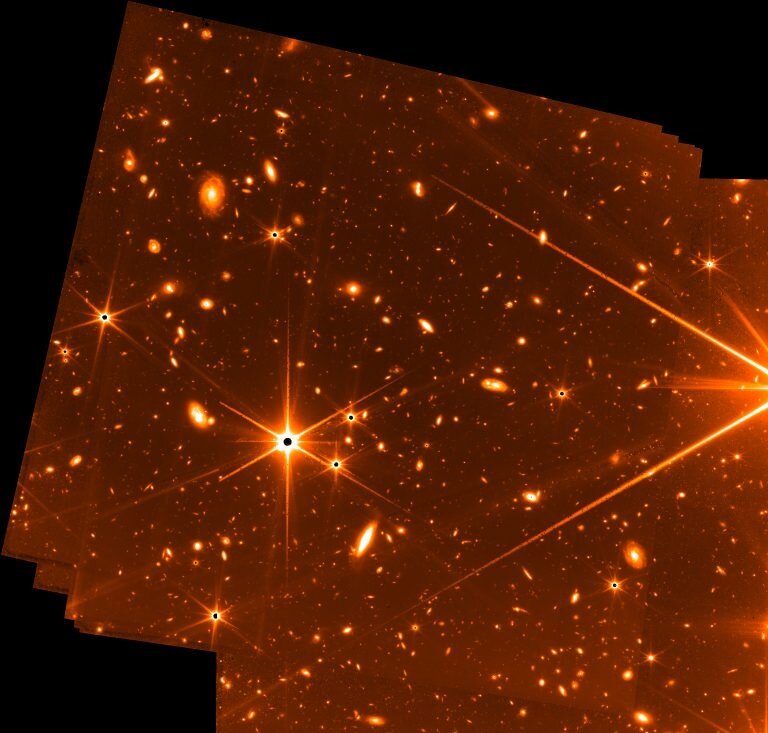 NASA has a provided a tantalizing teaser photo ahead of the highly-anticipated release next week of the first deep-space images from the James Webb Telescope—an instrument so powerful it can peer back into the origins of the universe.

The $10 billion observatory—launched in December last year and now orbiting the Sun a million miles (1.5 million kilometers) away from Earth—can look where no telescope has looked before thanks to its enormous primary mirror and instruments that focus on infrared, allowing it to peer through dust and gas.

The first fully formed pictures are set for release on July 12, but NASA provided an engineering test photo on Wednesday—the result of 72 exposures over 32 hours that shows a set of distant stars and galaxies.

The image has some “rough-around-the-edges” qualities, NASA said in a statement, but is still “among the deepest images of the universe ever taken” and offers a “tantalizing glimpse” at what will be revealed in the coming weeks, months, and years.

“When this image was taken, I was thrilled to clearly see all the detailed structure in these faint galaxies,” said Neil Rowlands, program scientist for Webb’s Fine Guidance Sensor at Honeywell Aerospace.

Jane Rigby, Webb’s operations scientist at NASA’s Goddard Space Flight Center, said the “faintest blobs in this image are exactly the types of faint galaxies that Webb will study in its first year of science operations.”

NASA administrator Bill Nelson said last week that Webb is able to gaze further into the cosmos than any telescope before it.

“It’s going to explore objects in the solar system and atmospheres of exoplanets orbiting other stars, giving us clues as to whether potentially their atmospheres are similar to our own,” he said.

Webb’s infrared capabilities allow it to see back in time to the Big Bang, which happened 13.8 billion years ago.

Because the Universe is expanding, light from the earliest stars shifts from the ultraviolet and visible wavelengths it was emitted in, to longer infrared wavelengths—which Webb is equipped to detect at an early resolution.

At present, the earliest cosmological observations date to within 330 million years of the Big Bang, but with Webb’s capacities, astronomers believe they will easily break the record.

Webb telescope: NASA to reveal the deepest image ever taken of universe

This document is subject to copyright. Apart from any fair dealing for the purpose of private study or research, no part may be reproduced without the written permission. The content is provided for information purposes only.