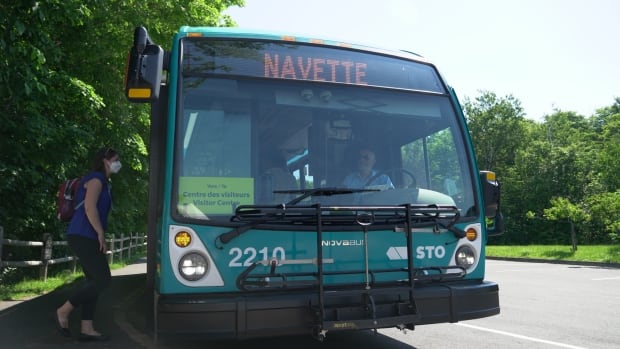 For the first time, a free shuttle bus service will ferry nature lovers to some of the most popular spots in Gatineau Park during the summer.

Saturday marked the start of the pilot project, which will run every weekend until Aug. 28.

Regular shuttles have operated every fall for a three-week period, and that will still continue.

“We’re making Gatineau Park more accessible, more equitable for people who either don’t own a private car or don’t have access to one or don’t want to drive,” said Tobi Nussbaum, CEO of the National Capital Commission (NCC), at the official launch Sunday.

“There’s also a conservation element to this in the sense that we want to reduce the number of private vehicles that are circulating in the park.”

Nussbaum said the number of visitors to Gatineau Park has significantly increased since some parkways were closed to motor vehicles, a step the NCC took in 2020 during the early stages of the COVID-19 pandemic.

That led thousands of people to sign a petition earlier this year that called on the NCC to reverse the policy.

But without cars on those roads, more people have been visiting the park, Nussbaum said.

“By reducing the number of private vehicles, we’re actually increasing the overall usage in the park while thinking deeply and ensuring access both from an equity and an accessibility point of view,” he said.

The daytime shuttle service departs from downtown Ottawa at Wellington and Lyon streets and from the Canadian Museum of History in Gatineau, Que., taking passengers to scenic locations like Camp Fortune, Pink Lake and Champlain Lookout.

The first shuttle departs Ottawa just after 9 am, with the last one the park around 4:45 pm They leave run roughly every half hour.

In the neighbor town of Chelsea, Que., the new service has become a cause for celebration.

“We hope that it will be extended so that it will allow our employees to use it in the future [with] more hours and a larger route,” she added.

Mayor Pierre Guénard hoped the shuttle would bring in more employees for small, local businesses in need of staff, while also reducing the volume of traffic that’s converged in the town since the parkways were closed.

“Hopefully this shuttle will be very positive [and will] bring people to Chelsea from Ottawa and then Gatineau,” he said.

The NCC is also offering more assisted mobility options this year, such as four-wheeled electric scooter rentals. The service will also be provided for free, the commission said.