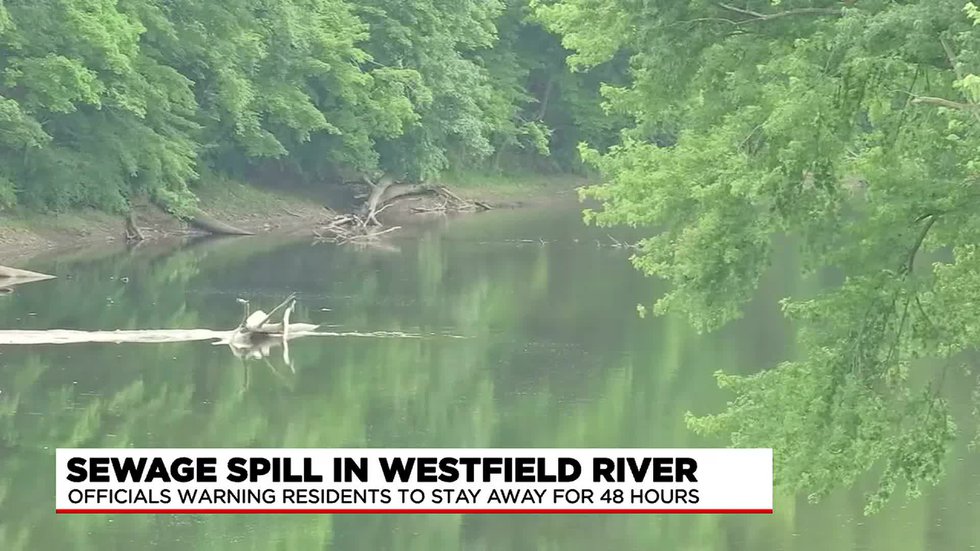 The warning comes after hundreds of thousands of gallons of untreated sewage spilled into the water.

Officials told Western Mass News that this was all caused by a break in the sewer line further down on Main Street. We caught up with some fishers who said they did not know about the spill and are not sure what effect the sewage may have on the fish.

Residents reacted to the sewage leak in the Westfield River.

“It is pretty awful to hear that,” explained Rackliffe

The Agawam Department of Public Works said a break in the sewer line near the Hood plant on Main Street caused about 50 gallons of untreated sewage per minute to discharge into the river, totaling roughly 540-thousand gallons, which is worrying to people who live nearby .

“It seems like maybe something should’ve been done so there could’ve been preventative issues, I mean matter. I think there probably is a time limit when things need to be checked and redone,” said Rackliffe.

Agawam DPW’s superintendent, Mario Mazza told Western Mass News that the break was in a remote part of town, and he said it’s not something that is easily seen.

People fishing in the area where the Westfield River flows into the Connecticut River told us they did not have any luck catching anything.

“It’s a kill-off for a lot of fish in this place, and it makes a lot of people not want to come down here. I mean, we came down here, we were the first people down here,” said Derrick Bayton of Springfield.

Officials from the Massachusetts Department of Environmental Protection said that on July 7 at 4 p.m. Massachusetts Emergency Management Agency, MEMA, notified them of a report from a kayaker who said he’d noticed discoloration and odor of the water on June 30.

MASSDEP said they immediately contacted the kayaker to get more information.

The kayaker confirmed he did not report his observations until July 7. MASSDEP said they immediately notified the Agawam Department of Public Works, which then ceased the discharge at 10-40 am on July 8.

“We are isolated [the break]. We have valves; dual mains there, so we shut down the affected main and rerouted the sewage into the other main. And then we spread a disinfectant there to neutralize the bacteria.”

Officials are asking people to avoid contact with the river until at least 11 am Sunday. More information can be found here.