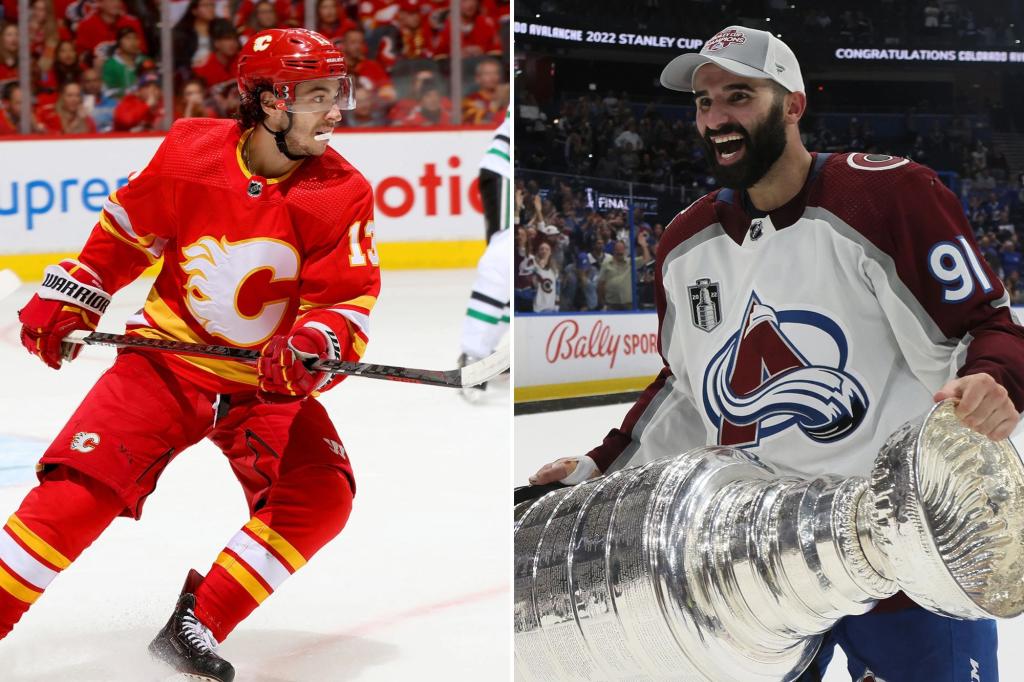 The draft is over, and the NHL is on to free agency. Both New York teams figure to be players when the market opens on Wednesday, with the Rangers needing to add a second-line center and the Islanders looking for a scoring winger.

The Post looks at the top 20 players who could hit unrestricted free agency.

If Calgary can’t come to terms before Wednesday, Johnny Hockey will be the prize of the summer for whoever signs him following a 115-point season in which he led the league in plus-minus. A homecoming has been speculated for the Carney’s Point, NJ native, and if it doesn’t work with the Devils, Gaudreau would instantly revitalize the Islanders, if they could find a way to fit him under the cap.

Fresh off a Stanley Cup victory, Kadri will be the top center available should he go to market, having rehabilitated a poor postseason reputation. Kadri, who turns 32 in October, had a career-high 87 points last season.

The Lightning off-loaded Ryan McDonagh to Nashville last week in hopes of finding a way to retain Palat, but couldn’t stop the 31-year-old from going to market. Palat was a key winger on Tampa Bay’s two Cup teams and led the postseason with 11 even-strength goals.

After a postseason in which Nichushkin scored nine goals and proved to be one of the Avs’ most valuable players, he could be the most valuable winger to hit free agency other than Gaudreau thanks to his age (27) and playoff pedigree. Getting a deal done in the next few days will be of high priority for Joe Sakic.

Burakovsky could be a casualty of Colorado’s Cup-winning roster and if so, will be tough to replace. Burakovsky averaged 16:16 time on ice for the Avs and finished the regular season with 61 points.

After Penguins GM Ron Hextall got Kris Letang locked up for six years and $36 million, Malkin is the next order of business. Despite his advanced age, it would represent a sea change in Pittsburgh if the Russian were to leave.

After a successful stint in New York, the belief is that Copp will be out the door to test his value on the open market. The Red Wings, who hold a mass of cap space and need a center behind Dylan Larkin, could make sense as a destination for the Michigan native.

Bruins GM Don Sweeney has been positive about the team’s progress on Bergeron, who is deciding between a 19th season with the Bruins and retirement. At 36 last season, he proved he can still be effective with 65 points.

Giroux, who was dealt to Florida at the deadline, will have a choice on his hands between going to a contender or a homecoming. Ottawa has been a rumored destination for the longtime Flyer, but the Senators are realistically well off Cup contention even after adding Alex DeBrincat at the draft.

It seems Perron will go to market after The Athletic reported last month that his camp felt lowballed by the Blues’ initial offer. The veteran winger scored 27 goals with 30 assists last season, but turned 34 in May.

Though Strome expressed a desire to remain in New York on the Rangers’ breakup day, The Post’s Larry Brooks reported last week that he plans to test the market. Term will likely be a determining factor, as Strome noted on breakup day that his entry-level contract with the Islanders was his longest deal in the NHL.

Unless Strome or Copp end up changing direction, Trochek would be a logical person for Chris Drury to look to as a 2C. Trochek, who turns 29 on Monday, is coming off a 51-point season with the Hurricanes in which he averaged 17:52 TOI.

It’s a thin group of defensemen hitting free agency, but Klingberg stands out as perhaps the lone unquestionable top-four player (depending where you fall on Ben Chiarot). That puts Klingberg, who had 47 points in 2021-22, in a nice position ahead of Wednesday.

Exactly how well was Kane’s rehabilitation campaign in Edmonton received? We’ll find out with the reception he gets on the market. Following a litany of off-ice issues, including allegations of betting on his own games, assault and domestic violence, Kane averaged nearly a point per game with the Oilers after being signed in January. If Kane and the NHLPA win their grievance against the Sharks, he could be awarded back to San Jose, which terminated his seven-year, $49 million deal during last season.

Campbell will hit free agency as the top goaltender available even after a second half in which his star faded a bit. He started 49 games for Toronto last season with a .914 save percentage and 2.64 goals against average.

Marchment is quietly one of the more intriguing players of this free-agent class, having established himself as a solid middle-six winger with 47 points in 54 games last season. Even with that being the closest thing he has to a full NHL season, it’s enough for someone to take a swing on the 27-year-old.

The 31-year-old Chiarot is a polarizing player, whose advanced stats don’t measure up to the eye test. After being traded to the Panthers ahead of the deadline, Chiarot had eight points in 20 regular-season games and just one assist in a 10-game postseason run.

After a reasonably productive season in which he averaged 15:16 TOI and scored 21 goals, Mikheyev enters the market in a similar position to Marchment: a middle-six winger whose résumé is largely dependent on last season.

Following a strong year with the Flames, the defensive-minded Zadorov will be a strong fit for a team in need of a left-side defenseman. He could also end up back in Calgary, where he formed a strong third pair with Erik Gudbranson.

Buried on the depth chart in Florida, Vatrano should be able to capitalize this summer on a solid stint with the Rangers, as he scored 13 points in the postseason and was an integral part of the group that made the conference finals.