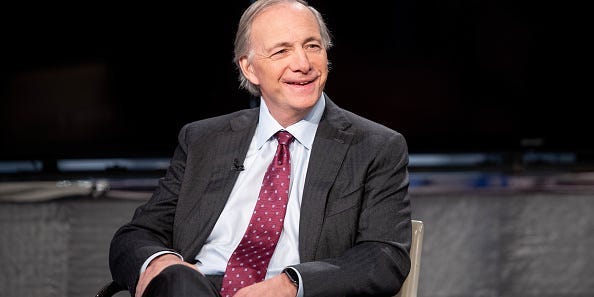 Bridgewater Associates posted a 32% return on its flagship fund through the first half of 2022, a source familiar with the matter told Insider.

Bridgewater, which has about $150 billion in assets under management, is the world’s largest hedge fund. It was founded by billionaire investor Ray Dalio in 1975.

The performance of Pure Alpha II offers a stark contrast with the broader market. The S&P 500 fell about 20% in the first half of 2022, marking its worst return for the first six months of the year since 1962.

which in turn presented opportunities for outsized returns for anyone on the right side of the market.

Bridgewater’s Pure Alpha II fund posted gains in 65% of the markets it traded in. It made money in sectors including interest rates, commodities, and developed-market currencies.

The Pure Alpha II fund has returned 11.4% on average each year to investors since it was established in 1991.

Dalio stepped down as co-CEO of Bridgewater in 2017 and is still its co-chief investment officer.

Bridgewater named Nir Bar Dea and Mark Bertolini co-CEOs in January 2022. Bar Dea was previously undersecretary CEO at the hedge fund, while Bertolini was the co-chair of its operating board of directors.