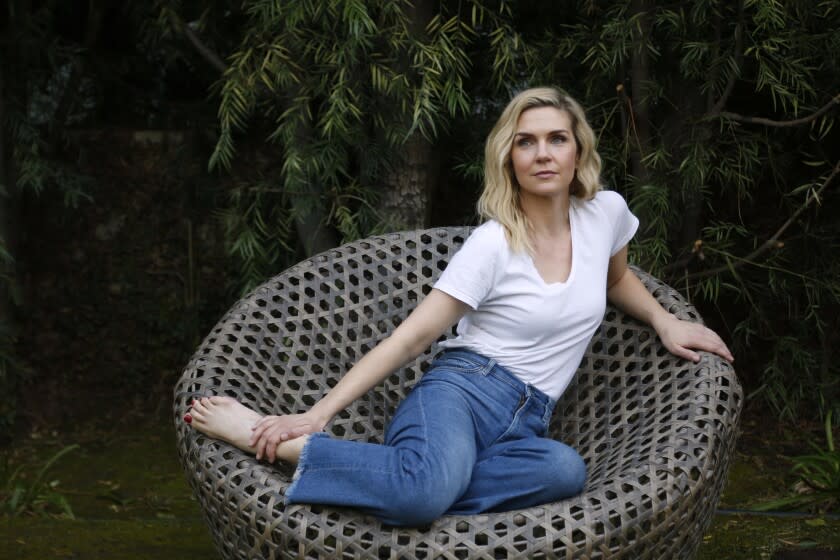 Fans have been saying for years that the Television Academy better call Rhea Seehorn with an Emmy nomination for her complex and devastating performance as Kim Wexler in AMC’s “Better Call Saul.” This year, they finally got her number right.

The nomination comes as “Better Call Saul” made its return Monday night, after a seven-week hiatus, to begin the last stretch of its sixth and final season — and let’s just say the look of fear and disbelief on Kim Wexler’s face in those closing minutes was something to behold.

The Times spoke with Seehorn about the morning’s jolt of excitement on her Tuesday. She was also nominated for actress in a short form comedy, drama or variety series for AMC’s “Cooper’s Bar.”

Can you give me a recap of your morning so far?

I am in London, so I’m right up on happy hour. I got to enjoy the morning where I am. But I was walking through the Borough Market with my beautiful fiancé Graham and the costume designer on “Better Call Saul,” Jennifer Bryan, because she’s here in London doing a show. We were hanging out together and we went over to American Bar at the Savoy Hotel because we heard it was beautiful and my fiancé looked over at me and he said, “Babe, you just got it.” And then the rest of the bar brought us over Champagne.

I love that. You must be aware of the Rhea fan club on social media — people have been calling for you to be recognized by the Emmys for years. Can you talk about the audience response to your performance? How has it felt to see how they rally for you?

It’s incredible. It’s hard to take in; it’s hard to explain. You could be a great actor who’s not given great material to do, you could be an actor doing the best work of their life and no one’s watching it, you could be doing great work that critics love but fans don’t; or great work that fans love but the critics don’t — and to somehow get all of these things as a gift has not been lost on me. The fans’ acceptance of me, the critical acceptance of me and what the writers and the directors have given me as far as the growth of the character, and me being allowed to challenge myself, it’s amazing. People pulling for me, saying “she should be nominated,” is a bit surreal because you’re just like, “Gosh, I already got the brass ring.” But then when you have the academy and voters acknowledge you and say, “We want to give you a nod,” I won’t lie, that’s a lovely, special feeling that caused a little tearing up.

I mean, on my Twitter feed yesterday, I was seeing tweets like, “If Rhea doesn’t get nominated, I’m finally leaving the US” It’s in jest, of course, but the love runs deep!

[Laughs] People were sending me links. My fiancé will tell you, I’m obsessed with NPR and apparently that’s what they were saying this morning on “All Things Considered.” And I was like, “What?! That is crazy!” And by the way, we’ve been walking around London, and Londoners are congratulating me. I’m over the moon. And also, on a personal level, my lovely fiancé has held my hand every morning that the nominations come out and we always watch the shows that the other performers are nominated for so I’m never sitting there going like, “What?!” We’re always like, “She’s was amazing!” Vice [Gilligan] and Peter [Gould] and all of my castmates and Bob [Odenkirk]Patrick [Fabian]I got texts from all of them.

Does it mean something to get it now, with the evolution the character has been through?

I can only imagine in retrospect that I would have been over the moon to be recognized by the Television Academy at any point. But I think the growth they’ve allowed me to have with this character, and where we are now, doing some of the most challenging work of my career — to be nominated now, it does feel special. As Peter says all the time, the work stands no matter what it is, it lives on, and I put my heart and soul into it — blood, sweat and tears — and so that matters more. And there are brilliant performances that were not nominated, and that’s not lost on me.

What has it been like to see Kim’s development? Her fate has become one of the standout aspects of this series.

We get the scripts one at a time, and that’s not a manipulative thing. [The writers] are finding the show; They’re watching what’s percolating and what’s happening and what’s blooming and following certain stories. And so I never knew what was gonna happen. And this is a long-winded way to say that there’s a part of you that’s reading a great novel, where something keeps unfolding and the character keeps getting richer and deeper and more complex. They’re allowing this character — a female character — to do all of these things and challenge what we think in our primal way of wanting to put people in a box. Suddenly, you couldn’t put her in a box. And I love that she was enigmatic and I love that she was inscrutable and all of these things we typically think are supposed to be unlikable about women and instead, it invited the audience in. I found the more I didn’t telegraph what I was thinking, the more the audience and the fans felt like they were my confidants.

Even Monday night’s episode — the look on your face in those closing moments, as Mike is giving Kim and Saul this sort of rundown of how they are to proceed after what’s just gone down, it’s so captivating what you managed to capture of her processing it all.

One of the gifts of getting to play a character for multiple seasons, for years, is I have the history of Kim cellularly in me, and so the loss that Kim is experiencing in that moment is also very clouded by shock. Bob and I had long conversations about the shock of it, even starting with [Howard] Hamlin getting shot, it was important to us that it’s clear that there’s only so much you can do to get through that. … Hold on, my fiancé is here and he hasn’t seen it because we’re in London so he’s running out of the room with his hands over his ears.

But when Kim’s walking up to Gus’ door, there was something about it that felt like: You have to make a decision at that moment in your life, are you willing to be a different person tomorrow, after this moment? There is no going back. Because Kim has spent multiple seasons, and possibly years of her life before “Better Call Saul” started, equivocating and rationalizing. “If you put your finger on the scale, just a little bit over on the side, as long as it’s for the good, as long as you’re helping the right person…” All these things that have become out of control and egotistical. She’s not God. You don’t get to decide who deserves what. And so now she’s in this place where, “You want to be the arbiter of all things? Would you kill a person to save another person?” For me, I have not had a lot of things in my life close to anything like that. And I fully understood Kim in her body and walking up holding a gun and understanding what it takes to raise that gun. And you can argue there’s no choice in order to save Jimmy’s life. There’s no choice. But I think it’s more about what decisions got me to here. Why is this my ultimatum?

That shook me a lot. And by the time they get to the last scene that you’re talking about, I could feel it in my chest. You decide where that lives in your body — sometimes it’s a lump in your throat, tightness in chest, pain in the back, whatever. And that’s what I played in that scene. It’s a loss, it’s such a loss. It’s broken, you can’t fix it.

We’re in the final stretch of this final season. Was it the ending you expected for Kim?

If I could, I would have my own show. I could not write what they wrote. I mean, it’s not like she moved to Mars and lives in a space station — it’s not ridiculous. But I did not see exactly what they were going to do. It’s more than I could have wanted. I’m still thinking about it.

I know this seems really like a dumb thing to wonder about, but I do wonder if she’ll have her ponytail in her final scene. Because like last night’s episode, the hair was down; we see the transformation — the ponytail had been such a reflection of her being put together, not just appearance-wise, but in work and in life.

I’ll say that you are correct to mark that her physical appearance and her need to be every hair in place and look a very certain way is part of her armor. That is a choice and you are right to remark upon that. And that is very purposeful. Listen, last night’s episode, when I say it was the most challenging stuff of my career, last night’s episode was one of them. But so are the next couple of episodes.

I know you’ve already had some Champagne, how else do you plan to celebrate?

We’re gonna have dinner and we’re going to actually watch the show. My fiancé cannot stand that everyone knows what happened and he doesn’t. We’re going to try to figure out how to watch. It’s so much fun to watch him watch the show because I don’t tell him a thing. He has no idea what happens.

I love that. And wait, before I let you go, what’s a text from Bob on a day like this. He has been leading the charge in calling for you to get a nomination.

That guy — I don’t think he’s done an interview without talking about me. And, by the way, so excited for his nomination. Good God, and what he has coming up [this season] is just the best acting ever. But he said: “Rhea! Nominated! You!” and then I won’t tell you the rest.