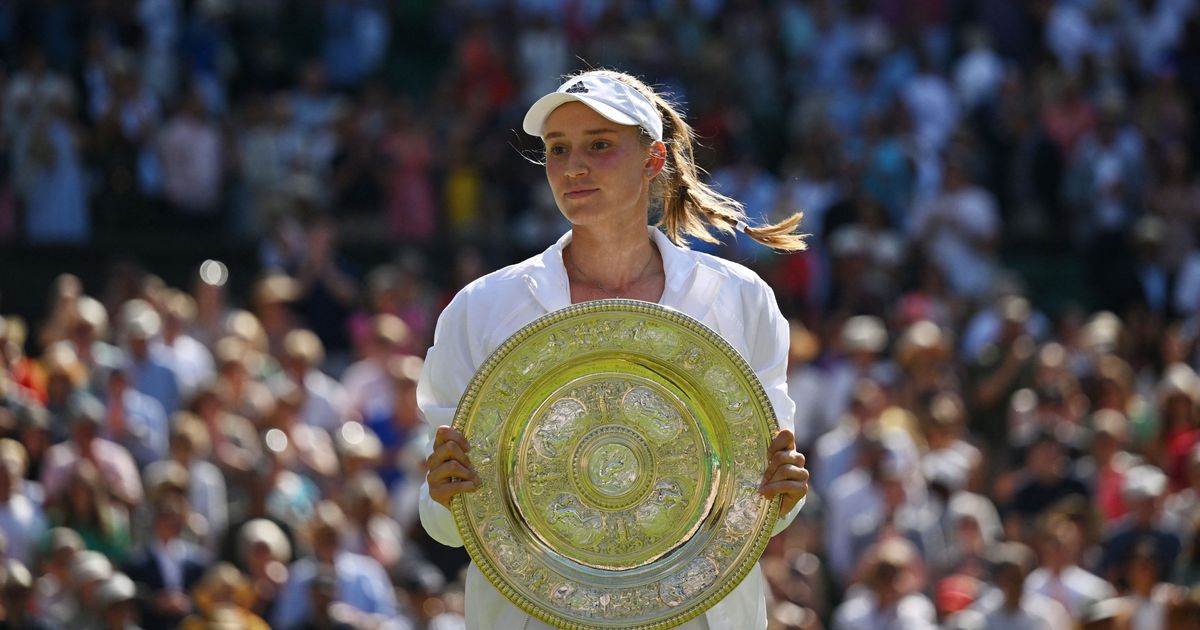 No.17 seed Elena Rybakina became the first player representing Kazakhstan to win a Grand Slam singles championship with a 3-6, 6-2, 6-2 victory against No.3 Ons Jabeur.

After sealing her first championship point with a service winner, Rybakina celebrated the 1-hour, 48-minute win with the barely a fist pump.

In the first Wimbledon title match between first-time Grand Slam finalists of the Open Era, Rybakina, 23, also became the youngest woman to lift the Venus Rosewater Dish since 21-year-old Petra Kvitova in 2011. She is now the fourth- youngest active major champion on the Hologic WTA Tour, older than only Iga Swiatek, Bianca Andreescu and Emma Raducanu.

Wimbledon is Rybakina’s third career title and first since Hobart 2020. In between, she had lost four straight finals, as well as last year’s bronze medal playoff at the Tokyo Olympic Games.

Rybakina defeated two previous Slam winners along the way, Andreescu in the second round and Simona Halep in the semifinals. Her victory against Jabeur was her first win against a Top 10 player since beating Garbiñe Muguruza in the Tokyo Olympic quarterfinals.

Rybakina’s previous best Grand Slam showing was at Roland Garros 2021, where she defeated Serena Williams to reach the quarterfinals before losing to Anastasia Pavlyuchenkova. This year’s Wimbledon was only the second time she had played the main draw in The Championships. In her debut last year, Rybakina made the fourth round before falling to Aryna Sabalenka.

Jabeur also leaves Wimbledon after making history. She has spent much of her career as a trailblazer for her country and region and is the first Tunisian and Arab woman to reach a Grand Slam final.

Match management: The higher-ranked Jabeur wasted little time in imposing herself on the match. In the first set, her drop shot and passes were both on song, and she used her variety to consistently put Rybakina in awkward positions.

Rybakina committed 17 unforced errors in the opener, a slew of which came to concede her serve to fall behind 2-1. Meanwhile, a fine serving display from Jabeur provided little opportunity to turn the set around. The World No.2 lost only four points on serve in total during the opener. And though Rybakina appeared to have settled midway through, she fell away with another sequence of cheap mistakes to lose the last eight points.

Rybakina’s second-set comeback was down to both raising her attacking game and delivering some of the best defense of her career. She upped her first-serve percentage from 58% to 63%, but her movement was a crucial component of this passage of play.

Throughout the second set, Rybakina repeatedly chased down Jabeur’s drop shots — and then delivering the touch needed to hit finely angled winners off them. Having broken Jabeur in the first game of the set, Rybakina avoided a momentum shift by surviving three break-back points to hold for 3-1.

Now, it was Jabeur’s turn to fall away, leaking impatient errors to fall behind a double break. Rybakina levelled the match with the minimum of fuss, slamming down four unreturned serves to close the set out.

With tension rising on Center Court, Rybakina maintained her level as the third set began. She broke immediately, once again outfoxing Jabeur in a point that is more often the Tunisian’s territory. Jabeur dragged Rybakina into the forecourt with a clever short slice, but it was Rybakina who was still able to put away the volley.

As in the second set, Rybakina faced the biggest challenge to her lead midway through the decider. Jabeur moved to a triple break-back point after a drop shot that skimmed the net and a perfect lob — but Rybakina’s serve was up to the task of fending them off, and she held for 4-2 with a confident volley.

Having passed that test, Rybakina motored to victory, breaking Jabeur again for 5-2 and then serving the match out at her first opportunity. She ended the day with four aces, taking her tournament total to 53, and 29 winners to 33 unforced errors.

Rybakina on overcoming nerves: “I was super nervous. Yesterday I had a good practice. But in evening I already started to feel like I’m too nervous. In the morning also. But I was just trying to tell myself that it’s a match and I already had experience I mean, for me the worse thing is if you’re up, then you lose the match.

“Ons, she played well. I needed time to adjust to her game. But then after I thought that I’m going to fight till the end no matter what. Just tried to focus on every point because it was very tough. It was super hot.

“I think it was first time really when I run so much to all these tricky shots from Ons.”

Rybakina on her calm reactions to winning: “I’m always very calm. I don’t know what should happen. When I was giving speech at the end I was thinking, ‘I’m going to cry right now,’ but somehow I hold it. Maybe later when I ‘m going to be alone in the room, I’m going to cry nonstop.

“Maybe because I believe that I can do it deep inside. But same time it’s, like, too many emotions. I was just trying to keep myself calm. Maybe one day you will see huge reaction from me, but unfortunately not today.”

Rybakina on what she proved: “Maybe I proved that not always you have to have great team from the young age, because I didn’t ’til the age of 17, 18. So I think this is the most important thing, that everybody, no matter their financial situation , no matter who they are, they can play and achieve many great results.

“And to myself that I can actually win a Grand Slam. Believe more in myself, and maybe I can win more Grand Slams. Who knows? But for sure that’s the goal, and that’s what I’m going to work for.”