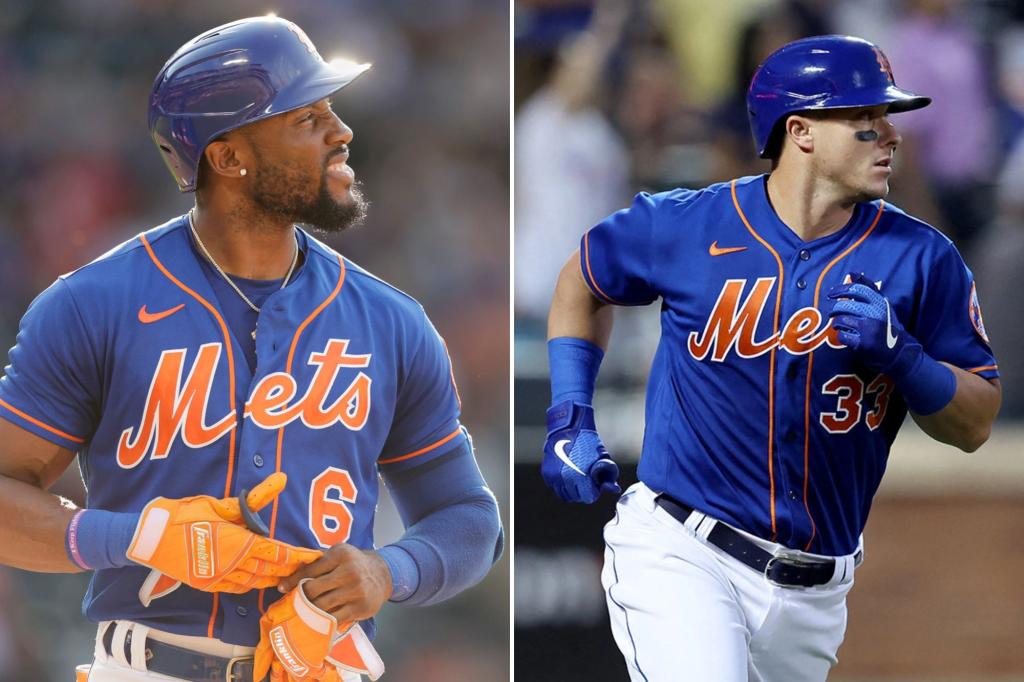 The Mets lost one of their hottest hitters mid-game on Saturday to an injury, then lost another starter to the training room two innings later.

Starling Marte exited the Mets’ 5-4, 10-inning win over the Marlins in the bottom of the fourth with left-groin tightness, the team announced, after he headed down the dugout stairs with a trainer instead of leading off the inning.

James McCann was then forced out of the game during the top of the sixth with left-side discomfort after the catcher made a tag at the plate and came up gingerly.

“McCann felt some tightness in his side when he reached back and made a great tag,” manager Buck Showalter said. “Marte came up to me and said, ‘I’m a little tight, I think I’m OK.’ But I’m not going to take a chance there. Same way with Mac, he came over and said he felt something, not sure if it’s a cramp or what.

“But we’re not in a position to be taking chances here.”

Both Marte and McCann will undergo imaging on Sunday, the Mets said, to determine the severity of their respective injuries.

Ender Inciarte pinch-hit for Marte and replaced him in the right field, while Tomas Nido entered behind the plate for McCann. Catcher Patrick Mazeika was also pulled from Triple-A Syracuse’s game, signaling he could be in Queens by Sunday if McCann requires aa second stint on the injured list this season.

Nido went on to deliver the game-tying hit at the bottom of the 10th, poking a double under the glove of third baseman Brian Anderson before coming around to score the winning run as the Mets walked it off.

In the top of the 10th, Nido also picked off Jon Berti at second base to make sure the Marlins only scored one run in the inning. He picked up a ball in the dirt and then fired to Francisco Lindor, who slapped the tag on Berti as his momentum going back into second carried him off the bag.

“I feel like we were taught in the minors to always throw the ball,” Nido said. “You never know what can happen at the other end.”

While Inciarte also made a great catch in the right field, replacing Marte’s bat would be tough if the veteran is forced to miss time. In 43 games since May 1, Marte was batting .319 with an .885 OPS.

McCann, meanwhile, was just two weeks removed from returning from the IL. He underwent hamate surgery in May and missed six-plus weeks because of it. He has gone 4-for-26 in nine games since his return, but crushed a three-run homer on Friday and said the strength in his wrist was beginning to come back.

More importantly, the Mets value McCann’s defense behind the plate and his rapport with the pitching staff, which would be missed again if he were to hit the IL.