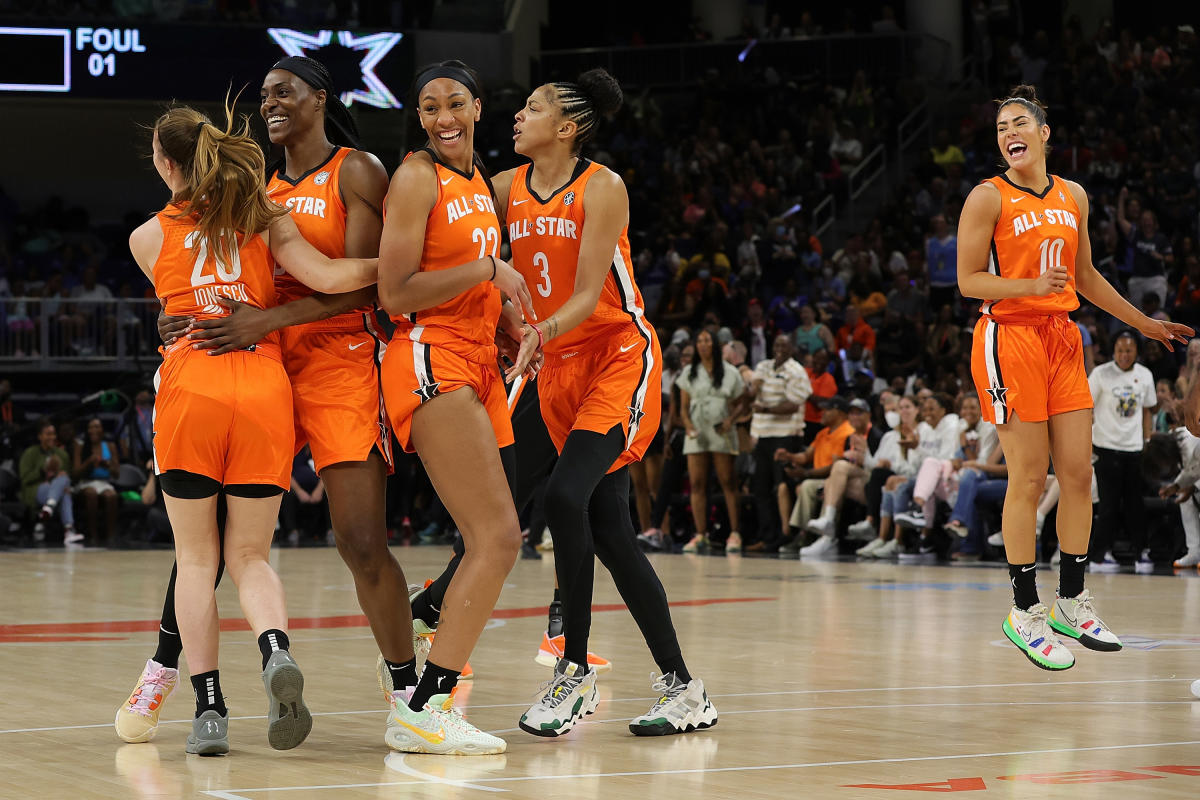 CHICAGO — As going-out parties go, it was a great one.

Sylvia Fowls and Sue Bird received roaring ovations with 2:10 to go at the 2022 WNBA All-Star Game at Wintrust Arena on Sunday. It was the pair’s final midseason showcase as both have announced their retirement.

Bird was replaced by Skylar Diggins-Smith and Fowls by Dearica Hamby, nods not to the younger All-Stars here in Chicago but the mid-range ones who will move up into the mantle of established superstars as the league’s best retirement.

Fowls, who started her career in Chicago, brought the house down with a first-half dunk and earned a win with Team Wilson, led by A’ja Wilson. They defeated Team Stewart, captained by Breanna Stewart, 134-112. It was a record total for Wilson’s squad in an All-Star game. The previous high was 130 set by the West in 2009 and 2017.

The game itself ballooned to a 20-point differential at the half in favor of Team Wilson and they kept a sizeable lead down the stretch. The game within the game was the antics, from Candace Parker locking down Sky teammate Kahleah Copper to Arike Ogunbowale crossing up Kelsey Plum, who could only laugh and try to catch up to her for a half-hug.

Plum was named All-Star MVP. She tied the All-Star Game record for points with 30, shooting 12-of-18 and driving to the basket early. It was the highest-scoring debut in All-Star history, per ESPN, and she adds the trophy to the 2021 Sixth Player of the Year as well as a 3×3 Olympic gold medal. She was 5-of-11 from 3-point range and added three assists.

Sabrina Ionescu scored 19 in her first All-Star Game. Rhyne Howard and Jackie Young also made their debuts in what’s being viewed as a transitional year between retirements and emerging stars.

Jonquel Jones came close to tying it herself for Team Stewart with 29 points, 13 rebounds, five assists and two steals. Jewell Loyd had 21 off the bench.

Fowls had her own shutdown moments, including blocking Ogunbowale and looking back with a big smile as if to say this isn’t the young guns’ league quite yet. But it was an ear-splitting moment that fans will most remember about the 36-year-old center’s final All-Star showcase.

Wintrust erupted not once but twice when Fowles threw down a dunk in the second quarter. They stood in anticipation, bellowed at the throw-down and again when it was replayed in the arena. Both benches were also up in celebration.

The pictures of her peers celebrating the moment will become iconic and it won’t be a time they soon forget.

“I was shook. I’m not even going to lie, I was so focused on trapping Jackie, so she didn’t score,” Wilson said of her Aces teammate, Jackie Young. “When Syl got the steal and the breakaway I was like, oh, my God, no way. When she did it, it was crazy. Syl could have walked off the court at that point and I would have been happy.”

Fowls now has a dunk in her first and final All-Star Games, per ESPN Stats and Information. The first was in 2009 when she played for the Chicago Sky and the crowd at Wintrust remembered pregame, giving her a louder ovation than nearly everyone outside the four current Sky stars.

Wilson came out with flowers for Fowls during a first-half break and Stewart did the same for Sue Bird, her Storm teammate for two WNBA titles. Fowls had seven points (3-of-4) and made a 3-pointer to start out, matching her career totals. She added nine rebounds, six assists, three steals and the block.

All-Stars roll out with new rules

The WNBA announced a few new rules and players most excited about the 4-point shot circles. They were out from the elbows and beyond the 3-point arc. Jonquel Jones hit the first one of the game in the first quarter as each team made clear they were going for big-point opportunities every time.

Ogunbowale and Diggins-Smith took turns at each corner attempting the shot. Ionescu hit one later in the half. But the attempts juice dropped off in the second half as Team Stewie attempted to cut into the league and more competitives kept flowing. There were also no free throws until the final two minutes and overtime, if needed.

The players set a record with 39 combined made 3s (which included the 4-pointers). It’s a bonkers stat line of 39-of-109. They were 96-of-201 overall. Loyd tied the record for most 3-pointers made in a game at seven and with Ionescu’s six, they combined to make it the first time two players had at least six makes in an All-Star game.

Plum, the No. 1 pick in the 2017 WNBA draft, is so deep into her break-out moment she’s become established. It was a rough start to her first All-Star after a bad, brick-filled showing at the 3-point contest.

The league’s second-leading scorer (19.9 ppg) said that was on her mind heading into Sunday, but late in the game she wasn’t aware of a record was in reach.

“I wanted to hit one on the end on Jonquel, so when I got the switch, I was like licking my chops,” Plum said, her well-worn and confident smile shooting through the room. “I’m like, yeah, this is what I wanted here. I missed a couple before that. So I was like, man, it’s one thing to score but I’m trying to get percentages. So, when I missed a couple I’m like, KP, you cannot let this like be the downfall.

“Especially anyone saw yesterday, I had to redeem myself. I’m not a rack shooter. I’m more of a game shooter. I’m glad it worked out.”

She ties the record set by Maya Moore, who scored 30 in the 2015 All-Star game. The second and third-most totals were in overtime games.