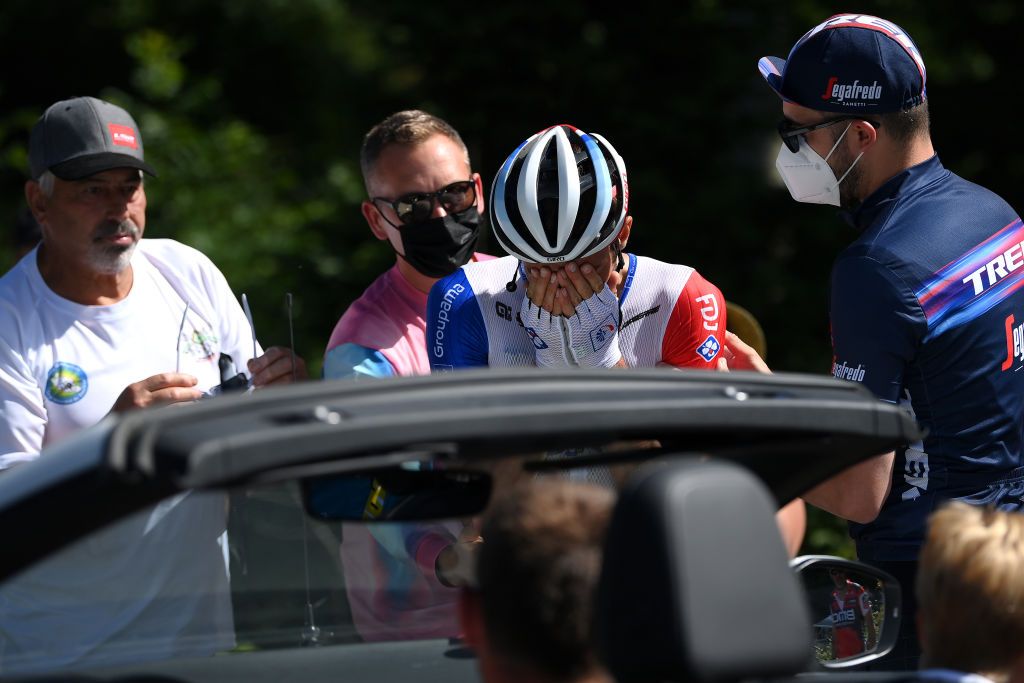 A Trek-Segafredo soigneur handing a musette to a team rider was in the path of FDJ-Groupama’s Thibaut Pinot and consequently struck the former third-place Tour de France finisher in the face.

Pinot suffered a run of bad luck in today’s stage 8, as he came off his bike with little over 40km remaining. He had not long remounted before he ran into trouble in the feed zone and was struck in the face – being so visibly shaken that he took a moment to embrace a nearby EF Education-EasyPost communications director Matthew Beaudin.

A day previously, on stage 7, Pinot lost 2:26 to Tadej Pogačar (UAE Team Emirates) into the finish of La Super Planche des Belles Filles, and sat 7:47 back in the overall standings in 24th place.

Speaking on Thursday, Pinot explained that he would consider a stage victory on home soil as a prestigious result, but that because he was playing a supporting role for Groupama-FDJ leader David Gaudu, he was not too focused on a personal result.

On the approach to the Tour, Groupama-FDJ’s team roster suggested Pinot and Gaudu would be joint leaders, but with Gaudu – who is currently fifth in the GC – targeting an overall result while Pinot was set to hunt individual stages.

On current from and still recovering from COVID-19, Pinot still seems slightly off the pace for a mountain stage win at this year’s Tour.

“Thibaut hasn’t found his complete form yet, which is normal after the COVID, but I think that we will see a great Pinot in the Alps and in the Pyrenees,” said team manager Marc Madiot after the finish of stage 7 on Planche des Belles Filles.

Following the fall and the face strike, Pinot made his way back into the peloton, but finished 2:18 behind the leading group of Pogačar on the road, in 51st position. He now sits just over 10 minutes off Pogačar in the general classification.

Oh no! Thibaut Pinot gets clobbered by the arm of the Trek soigneur. #TDF2022 #ITVCycling pic.twitter.com/dYTcQswBTRJuly 9, 2022