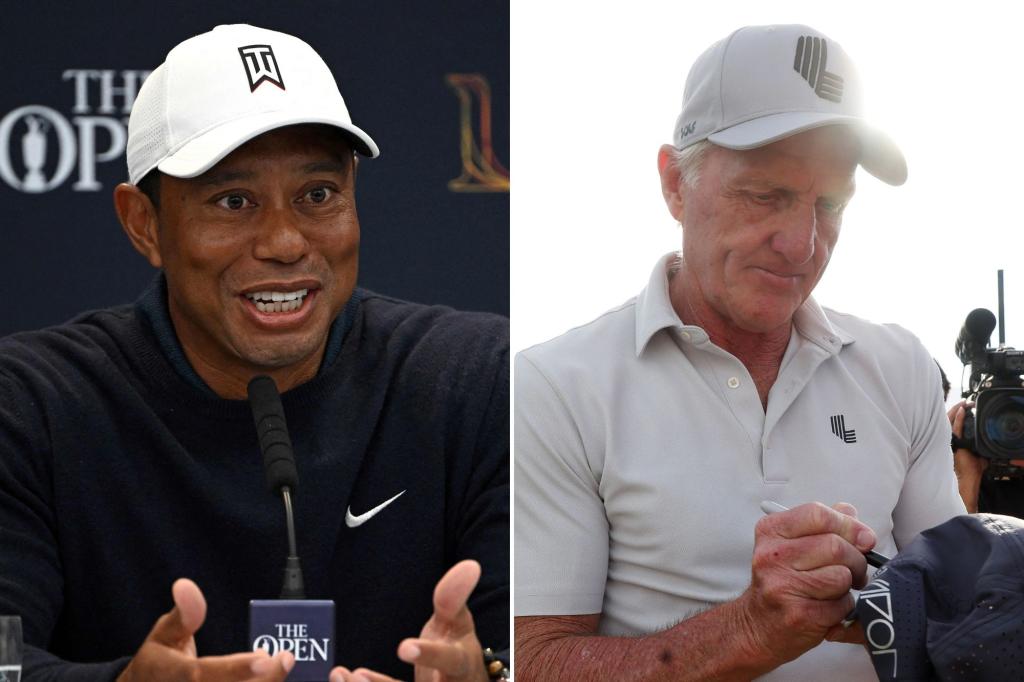 ST. ANDREWS, Scotland – Tiger Woods has, from the start, been a vocal proponent for the PGA Tour in its battle with the Greg Norman-led, Saudi-backed LIV Golf tour.

On Tuesday, in advance of the 150th British Open at St. Andrews, the 46-year-old, 15-time major championship winner dug the heels of his golf shoes in as deep as they’ve ever been during this crisis in denouncing the players who’ve fled the PGA Tour for the cushy, guaranteed Saudi money.

In doing so, Woods also stated his approval for the British Open’s governing body, the R&A, disinviting Norman (a two-time Open winner) from participating in its Celebration of Champions exhibition on Monday and the Tuesday night champions dinner.

“I believe it’s the right thing,” Woods said of Norman being blackballed from the Open this week. “The R&A obviously have their opinions and their rulings and their decision, Greg has done some things that I don’t think is in the best interest of our game, and we’re coming back to probably the most historic and traditional place in our sport.”

“I know Greg tried to do this back in the early ’90s,” Woods went on. “It didn’t work then, and he’s trying to make it work now. I still don’t see how that’s in the best interests of the game. What the European Tour and what the PGA Tour stand for and what they’ve done … and all the governing bodies of the game of golf and all the major championships, how they run it, I think they see it differently than what Greg sees it .

“I know what the PGA Tour stands for and what we have done and what the Tour has given us, the ability to chase after our careers and to earn what we get and the trophies we have been able to play for and the history that has been a part of this game.”

Woods went as far as to say that the players who’ve joined LIV Golf have “turned their back” on the tours that helped them create their respective careers.

“The players who have decided to go to LIV and to play there, I disagree with it,” Woods said. “I think that what they’ve done is they’ve turned their back on what has allowed them to get to this position.

“Some players have never got a chance to even experience it – they’ve gone right from the amateur ranks right into that organization, and never really got a chance to play out here and what it feels like to play a Tour schedule or to play in some big events.

Woods, who kept saying he’s learned the game and got to where he is today by “digging it out of the dirt” and “earning everything” he’s gotten, took pointed shots at the guaranteed money the LIV players are getting as lazy.

“I can understand 54 holes is almost like a mandate when you get to the Senior Tour. The guys are little bit older and a little more banged up. But when you’re at this young age and some of these kids – they really are kids who have gone from amateur golf into that organization – 72-hole tests are part of it. We used to have 36-hole playoffs for major championships. That’s how it used to be, 18-hole US Open playoffs.