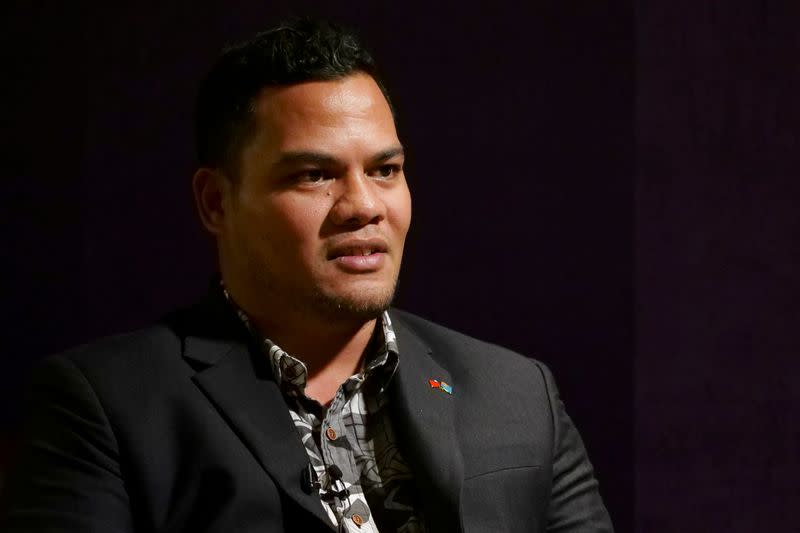 SUVA, Fiji (Reuters) -Tensions between China and the United States, and the withdrawal of the remote Pacific island nation of Kiribati, have overshadowed the Pacific Islands Forum as leaders arrived in Fiji on Monday for the first in-person summit in three years .

During the four-day meeting, Pacific island leaders will discuss how to gather more international support and funding to fight the impact of rising sea levels and climate change, as well as China’s ambitions for greater security ties across the region.

A bid by Beijing to sign a broader regional trade and security deal with 10 nations that recognise China, but is opposed by some forum members, was also to be discussed.

Tuvalu Foreign Minister Simon Kofe said in an interview he was saddened by news of Kiribati’s withdrawal and Pacific leaders would need to “look at the concerns raised by Kiribati” when they meet this week.

Kiribati President Taneti Maamau said in a letter his country would withdraw from the forum because he did not agree with terms of a deal brokered weeks ago to solve a rift between Micronesian states and other members, and wanted the delayed meeting.

Also being discussed by Pacific leaders is fisheries – tuna is a major source of revenue in the region – but the issue also risks being caught up in geopolitical tensions, Kofe said.

China operates a large fishing fleet in the Pacific and is seeking greater access to one of the world’s richest fishing grounds.

“This geopolitical competition will continue and it is important the Pacific focuses on the issues that are critical to the Pacific climate change and the conservation of our resources,” Kofe said.

The United States wants to expand a treaty fisheries in the Pacific to cover “other security issues”, he said, and this would be discussed at the forum.

Tuvalu is among four Pacific nations that have diplomatic ties with Taiwan and not Beijing.

Kofe withdrew from a recent UN Ocean conference in Lisbon after China barred the presence of Taiwanese members included in the Tuvalu delegation. He said this was “bully tactics” by China.

Nonetheless, Kofe said Tuvalu doesn’t want differences between China and Taiwan to distract Pacific islands from what unifies all nations in the region this week.

“Maintaining the unity and solidarity of the Pacific family is critical for us to be able to navigate many of these issues that we are facing,” he said.