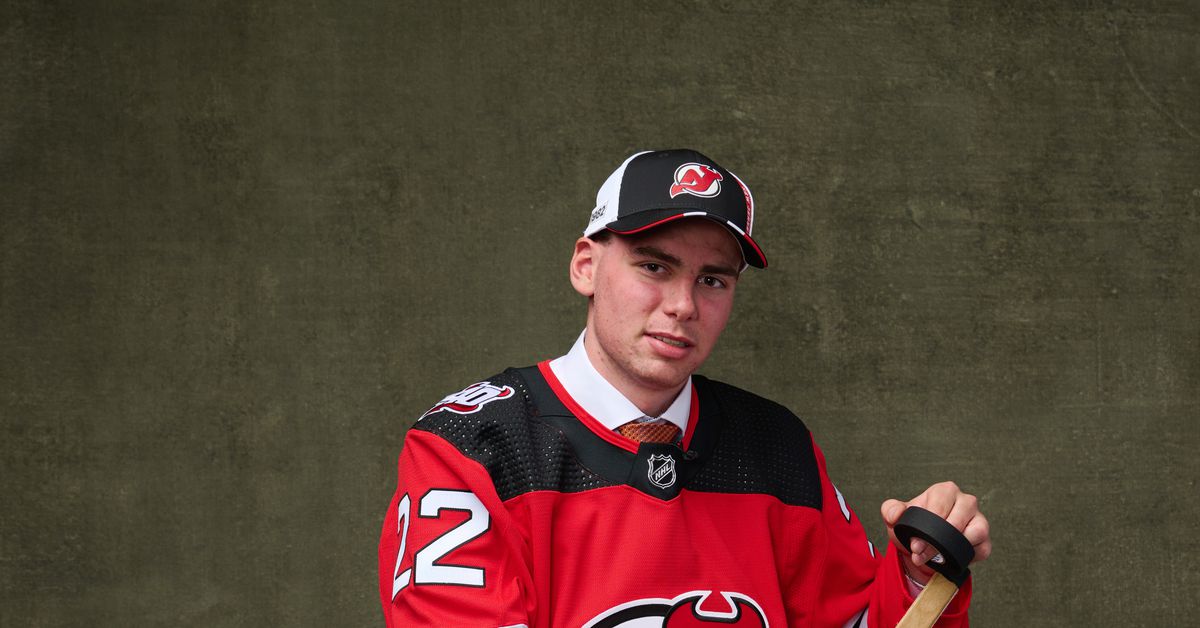 The 2022 NHL Draft is now fully in the books. Trades were made. 225 players were picked. The New Jersey Devils went into Montreal with 9 picks and left with 8 prospects and the signing rights to goaltender Vitek Vanecek. I have compiled my thoughts about the draft class and the trade here. The offseason is now shifting towards free agency with qualifying offers due on Monday, July 11, and the first day of unrestricted free agency – Free Agency Frenzy – kicking off at noon on Wednesday, July 13. Brian will provide a State of the Prospect Pool from his perspective tomorrow. However, before we get there, we need to look at what you thought.

This post is all about you, the People Who Matter. We put a flash poll with every post about each player picked to get your initial reaction to the selected player. It is now time to reveal the results of those polls to find out what the you felt as a collective, pick by pick.

The selection of Nemec came as a bit of an initial shock. Juraj Slafkovsky was the player a lot of the People Who Matter, mock drafts, and experts felt the Devils would take. Then Montreal took him at first overall. Instead of Shane Wright or even Logan Cooley, the Devils went in a defensive direction with Nemec. From the 370+ comments in the post, the first few hundred were more unhappy. Over time, positive opinions took over and won out. The plurality of you all liked the selection and over half either liked or loved it. Still, there was good percentage of you who were unsure or did not like the selection. It remains a stark contrast to, say, Luke Hughes being picked at fourth overall last year. The results are the results.

I do view Nemec as the best D-man in this draft and if we were going to take one then he’s the right choice. But I think some people are really, really, really hoping he turns into a Makar; in reality we’d be happy if he turned out to be better than Adam Larsson. Oh well, it’s over with, but I’m just not very happy with Fitz right now. I think this is one of those cases where he tried to get too cute. I’m a big believer in best player available and this goes against this. It makes winning the lottery look pointless. I’m a “meh” with this pick because I do like Nemec, but I simply don’t like the value. Drafting straight up for need is where you run into problems just like Zacha at #6 (which is especially bad considering other guys who went after him in the draft).” – Do0msday

Reactions to the Casey selection were quite positive. The “I like the pick” choice nearly took a majority. There were very few people who did not like or hate it. While I would have preferred about 4-5 other players, I did like it too.

A Comment from the Post about the Pick: “NJ will likely own 3/6 of Michigan defense next year. Casey, Edward, Hughes

The Devils have consistently drafted a goaltender in each draft since 2015. This year, they drafted the top ranked goaltender among North American goaltenders per CSS and someone thought to be in the third or fourth round range. If you’re going to take a swing at a goalie, then why not someone like Brennan? The poll voters were quite positive with this selection and only 12 people did not like or outright hated the pick.

A Comment from the Post about the Pick: “Getting the top goalie in NA even in a weak goalie class is good value for a 4th. Good pick.” – jtclockwork

Between this being a fourth round pick and the prospect being a MHL defenseman who only played in the MHL last season, the poll votes started to dwindle more. Still, as with Brennan, the majority of voters were quite positive. I expected to see more of that third option selected, but I think those who voted read what Brian wrote and came away pleased. I will admit it is hard to dislike or hate a mid-fourth round selection.

The middles/I don’t knows won this in a plurality, however there were more negative votes than positive ones. Again, this is a fourth round selection and so any success from the pick likely needs to be celebrated. Then again, the Devils have plenty of defense-first defensemen with limited upside in their pool. That this is the first pick where the poll winner was not “I like the pick” is not that bad being that it is 126th overall and the fifth such poll.

A Comment from the Post about the Pick: “If we hadn’t already selected Nemec, Casey, and Orlov, then I’d be meh about this pick. I’d rather a forward here than a kid who at his best might crack the NHL as a #6 or #7 defenseman.” – alslammerz

The first forward drafted by the Devils in the 2022 NHL Draft was received pretty well. He is a winger. He is large (6’4” and 207 pounds). He is 18 but an “old” 18 given his September 19, 2003 birthdate (he made the draft cutoff by 4 days). He put up plenty of points at the Czech U-20 level. It remains to be seen whether he stays, goes to Sagniaw in the OHL, or what. As Brian wrote in the post, it’s a fifth round pick and it adds depth to the wing position. The voters received the pick positively with very little negativity.

A Comment from the Post about the Pick: “First to coin the ‘Hauser Howitzer’!! lol, not a bad pick to see if he can develop into a 3-4th liner.” – Seven7Devils

The second forward drafted by the Devils in the 2022 NHL Draft was received even better by the 161 People Who Matter who voted in the poll. A combined 85% either loved or liked the pick. That 40% for “I love it” was stunning to me at the poll closure. I liked the pick a whole lot and I was not alone in that sentiment. Filmon will certainly be one people will keep an eye on as he progresses at Swift Current.

A Comment from the Post about the Pick: “Everyone seems to really like this pick. That’s super super skinny. Very small frame. Even if he puts weight on it’s gonna be hard to keep it on. Sometimes those are the guys that work out. A long stick for shooting can use more leverage than strength. A long stick has a lot of benefits on forchecking. If he can build the muscle in his legs he could be a very strong skater. Won’t have all of the upper mass that holds bigger guys back from agility & quick steps. You never know when these late round picks are going to hit. It happens & if anyone thought it would they’d be drafted well over 100 picks earlier.

For these later picks I think I’d be looking at attitude the most. How much does hockey mean to you? Are you going to be relentlessly driven? Is the AHL gonna be satisfying enough? The things I read about Bratt throughout his whole career in NJ has been amazing. I remember 1 tweet from Amanda Stein where he was out on the ice by himself practicing & after some shots celebrating like he just won the game. When you practice so much every day & still can’t wait to get out on the ice it’s a rare dedication & love for the sport. If you love it that much I think that’s the type of guy I’m taking a chance on.

I really enjoy following these guys after they’re drafted. Gonna be fun to follow all the new Baby Dev’s. Best interviews have been Seamus Casey. Man is that guy having fun!!” – DaneykoFan

The last pick of the 2022 NHL Draft for the New Jersey Devils was the most loved. At least by percentages; his 41% edged out Filmon’s 40% in that category. And with a combined 89% for loving and liking the pick, his selection was the most proportionally positive. Granted, he also received just three more votes than Hauser so take it with a grain of salt. I think the People Who Matter who voted appreciated the Devils taking a flyer on a Russian physical defenseman who played a lot and well in the MHL last season. I’m sure lowering the boom on Slafkovsky did not hurt. Brian’s post certainly did well to get people on board with the Devils’ fifth defenseman taken in Montreal.

It is easy and tempting to look at the Devils’ 2022 draft class and make a judgment. However, development, growth, Lady Luck, and Father Time will be the real judges. I use five years as a rule of thumb as that is the longest a player can be on an ELC since being drafted. We shall see then whether this back-end heavy draft turned out well for the Devils.

Still, I think there is value in highlighting that most of you liked what the Devils did in Montreal in the last two days. For all of the comments lamenting Nemec being picked, a plurality of you liked that pick. As well as with the selections of Seamus Casey, Tyler Brennan, Daniil Orlov, and Petr Hauser. The last two picks, Josh Filmon and Artem Barashanov, got the most love. The only pick that had more of a negative vote than a positive one was Charlie Leddy at 126th overall; and even that selection’s poll winner was “I don’t know / I’m in the middle.” Going by the wisdom of the crowd, the Devils did at least all right at the 2022 NHL Draft – and that is not even considering the Vanecek trade. I think that lines up with my own thoughts, which were posted three-and-a-half hours before the polls closed. I doubt that it significantly biased the polls. If it did, so be it. This is a hockey blog asking for takes on 18-year old prospects being picked today, most of whom were unknown until today. It is not a social experiment. The conclusion remains: you collectively thought the Devils did pretty good at the 2022 NHL Draft. Perhaps moreso if you liked the Vanecek trade (which I did).

I want to thank again all of the great sources out there about prospects. Such as data sources like Elite Prospects and Pick224. Definitely scouting services and people such as Smaht Scouting, Will Scouch (Scouching), Corey Pronman and Scott Wheeler at The Athletic, The Hockey Writers, Dobber Prospects, and Ben Kerr at Last Word on Sports among many. I want to thank Alex, Mike, Matt, Stephen, Chris and especially Brian for the prospect profiles this year. Brian also helped a lot with Day 2 of the draft and will have a State of the Prospect Pool tomorrow. Of course, I want to thank everyone who checked out the site, left a comment, and/or voted in the flash polls at All About the Jersey between Thursday and Friday. You are indeed the People Who Matter. Free agency is up next on Wednesday, but pay attention here as I suspect there will be a lot happening between now and then. Thank you for reading.