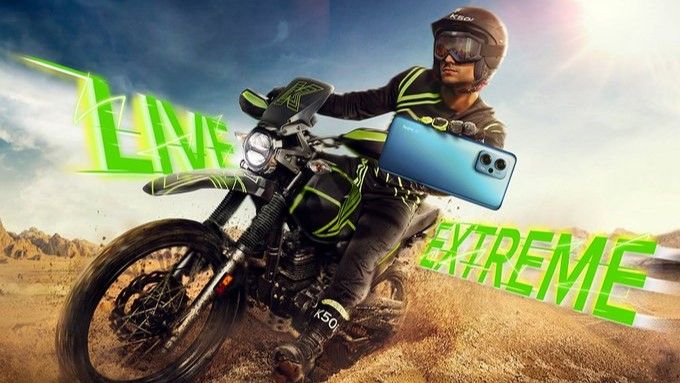 Xiaomi India has announced that it will introduce the Redmi K50i in India on July 20. This is the first Redmi K series phone after the launch of Redmi K20 and K20 Pro in 2019.

The upcoming Redmi K50i will debut in India on July 20, just a couple of days after the launch of the Oppo Reno 8 series. Though, unlike the Reno 8 series which consists of Reno 8 and Reno 8 Pro, the Redmi K50i might not be accompanied by any other device.

Looking at the teaser shared by the company, the Redmi K50i might come sporting a design that can be seen on almost every other smartphone in the market and to be fair, the company isn’t even boasting an out-of-the-box design like Nothing Phone (1).

The phone might sport a triple camera setup at the back which will be housed on a rectangular camera bump. The rear panel on this phone seems to be made of glass and might carry a matte finish. In terms of design, this seems very minimal and mundane, unlike the Redmi K20 lineup of devices.

Reports hint that the Redmi K50i might be a rebadged Redmi Note 11T Pro that was recently launched in China. Though we are not sure, it is certainly a possibility looking at the number of Redmi Note 11 phones that the company has already released in the market.

Adding another Note 11 device would have only confused the end users because the company has already introduced over 12 variants of Redmi Note 11 till the time we last tracked. This included the ones available in China and International markets as well.

Is it a worthy successor to the Redmi K20 Pro?

Coming back to the Redmi K50i, if this is indeed the Redmi Note 11T Pro, then this could be the most powerful Redmi phone launched in India to date.

The Redmi Note 11T Pro ships with a Dimensity 8100 SoC that can be seen in the Realme GT Neo 3 and the OnePlus 10R in India. The phone might come with a 6.67-inch LCD panel with a 144Hz refresh rate. This might be a downgrade considering the fact that the K20 Pro shipped with an AMOLED panel. The camera module might come with a 64MP, an 8MP and a 2MP sensor.

While the market dynamics have changed drastically since the launch of the Redmi K20 series. However, it punched its weight way above its price range. Hence the Redmi K50i will have bigger shoes to fill in.

End of life for the Redmi K20 Pro

In a related piece of news, Xiaomi has ended support for the Redmi K20 Pro ahead of the launch of its successor. The phone got a couple of Android updates and a couple of MIUI updates since it was launched.

The last update, however, spoiled the experience and many users suggested that the phone not only went sluggish but also broke the on-screen gestures. The last update also ended up degrading the overall camera performance of the device which resulted in a lot of users switching to a custom ROM instead of the official MIUI.

The Redmi K20 Pro, with a notch-less AMOLED display, and a pop-up selfie camera was one of the best and most premium devices from Xiaomi under the Redmi lineup. While the company did not introduce its successors till now in India, however, it had kept the lineup alive back home in China with regular iterations.