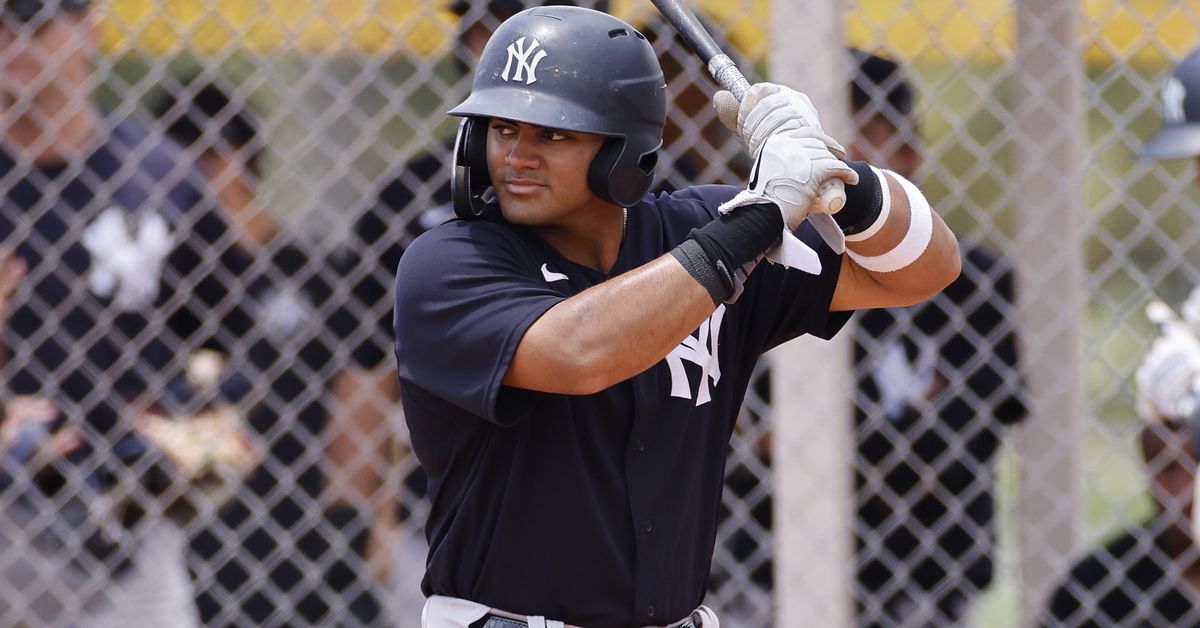 In the months leading up to the opening of the 2019-20 international free agency period, word started to leak out that the Yankees were a lock to land Jasson Dominguez, a generational talent nicknamed “The Martian” for his out-of-this- world talents. They completed the deal and signed three years ago yesterday.

Names like Mickey Mantle and Mike Trout were thrown around as comparisons, but the cancellation of the 2020 minor league season delayed Dominguez’s professional debut for a full calendar year. That debut would eventually happen on June 28, 2021 in the Florida Complex League. Now just a year past his professional debut in Rookie ball, check in on what Dominguez is as a player.

The hype did not stop at reporters and scouts getting a very small look at Dominguez. Current Yankees minor league hitting coordinator Joe Migliaccio said in an April 2021 interview, “When you think about ‘This guy has power, that guy has power,’ he doesn’t necessarily have power when you compare him to Jasson Dominguez.” The results from behind the scenes sounded promising and Dominguez was a fixture on Top 100 Prospects list before ever playing a game.

Dominguez routinely lights up Statcast with hard hit balls well over 100 mph. The triple in the video below was clocked at 108.2 mph and that exit velo allowed the low line drive to get past both outfielders leading to extra bases. His ability to make hard contact is mitigated by a very high groundball rate, which has been over 50 percent the last two seasons.

The high groundball rate is not a problem that is unique to Dominguez, as numerous Yankees prospects have battled it in recent years, but then seen their slugging percentages climb once those grounders turn into line drives. This season, catching prospect Anthony Seigler has seen his groundball rate drop by almost 20 percent from last season and his offensive numbers have climbed across the board, showing that there is a recent example of success in the system.

Something that was supposed to set Dominguez apart from other hard-hitting 16-year-old prospects was his hit tool. This tool has not fully lived up to expectations, but it is also still strongly evaluated among scouts. Dominguez struck out 31.3 percent of the time during his first year in Low-A and has lowered that to 28.2 percent this year through the end of play on Friday. The 30-percent mark is often used by evaluators as a point where they have a lot of concern about a player’s ability to contribute at the higher levels. Both Baseball America and MLB.com still rate Dominguez as a 55-grade hitter, which is above average.

Of the players in the Florida State League, Dominguez ranks ninth among qualified hitters in OPS. Seven of the players ahead of him are at least 21 years old. For his career, he has posted a 119 wRC+ and has done so while being between two and three years younger than the average offensive player at his given level.

Things also seem to be trending in the right direction for Dominguez after a slow start to the season. In the 54 games from April 24th through July 1st, Dominguez hit .275/.403/.477, which is good for a 155 wRC+. He also continued to lower his strikeout rate slightly to 26.3 percent in that stretch, while his walk rate has climbed in the right direction up to 16.9 percent.

The pre-signing reports on Dominguez credited him with double-plus speed that would allow him to be an above-average center fielder for a long time. Upon seeing Dominguez in action, scouts have downgraded his speed, fielding, and arm tools, as they did not match the hype from 2019. There is no reason to panic, as all of the tools were previous graded as either plus or even elite double -plus tools and they have just been downgraded to average or slightly above average depending on the source. There is a lot of speculation that Dominguez will now end up as a corner outfielder or an average center fielder as opposed to a plus defender in the middle of the field. Should he pan out in the role, that is still a very valuable prospect.

Will Dominguez ever be Mike Trout or Mickey Mantle? The short answer is no, and he was never going to be. It is time to leave the words of 2019 behind Jasson Dominguez and let his play on the field define his own path. Without the unrealistic hype, Yankees fans would be universally thrilled by this exciting prospect who has improved over the last 12 months while playing at an advanced level for his age.

If Dominguez continues to hit as he has over the last two months, he will certainly finish his 19-year-old season at the High-A level, where the average offensive player is currently 22.6 years old. That is absolutely a prospect worth following, even if he isn’t the perfect player he was once portrayed to be.