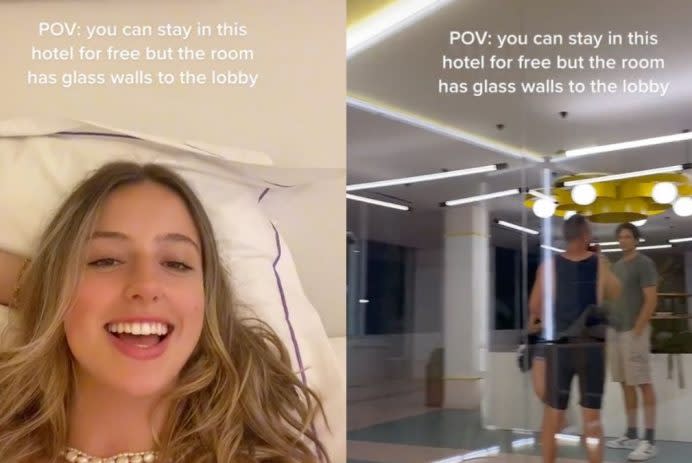 What would you do for a comped hotel stay in Ibiza? This unusual, “glass” hotel room has inspired a debate on TikTok.

Vlogger Olympia Anley captured attention on social media when she showed off her room at the Paradisio Art Hotel in Spain. Anley was allowed to stay in the space for free, but the kicker was that anyone walking by could see directly into her room. People on TikTok had mixed feelings about the arrangement.

“POV: You can stay in this hotel for free but the room has glass walls to the lobby,” the video text said.

The hotel room seems pretty standard — until you realize it’s made of glass walls. It looks more like a display – and there was no shortage of passersby to remind you of that.

The video received 11.5 million views and 1.5 million likes on TikTok.

“Hotel Paradiso Ibiza…the Zero Suite. Its an art project, you can only book it for one night…we’re staying in it in August,” a TikToker replied

How Evan Mock manifested his rapid ascent to stardom:

“Please where is the toilet,” someone commented.

“This would be my worst nightmare,” another wrote.

“I’d stay there no hesitation,” a person stated.

“Am I the only one who literally wouldn’t have a problem with it,” a user said.

The strange room is located at the Paradiso Art Hotel by Concept Art Hotels. The art-themed hotel has a gallery, exhibitions and even a tattoo studio.

“Each one of our hotels has a wow factor or unique feature that makes the hotel much more than just a building with rooms in it, and creates experiences that the guest will remember long after they check out,” Concept Art Hotels told Newsweek.

The Zero Suite has a bed, table, chairs and, yes, a private bathroom. Guests can stay in the room one night for free on the condition they sign a release that allows them to be photographed and recorded during the stay.

Shop all of Chlöe Bailey’s vibrant looks from her In The Know cover shoot:

In The Know is now available on Apple News — follow us here!

If you enjoyed this story, check out this cop dad who breaks down when he comes home early to discover his wife’s “betrayal.”

The post You can stay in this ‘glass’ hotel room for free — as long as you don’t mind strangers watching appeared first on In The Know.

More from In The Know:

TikToker reveals what traveling for work is really like: ‘Not glamorous’

TikToker claims that third-party site ‘BookARoom.com’ led her family to a nonexistent hotel