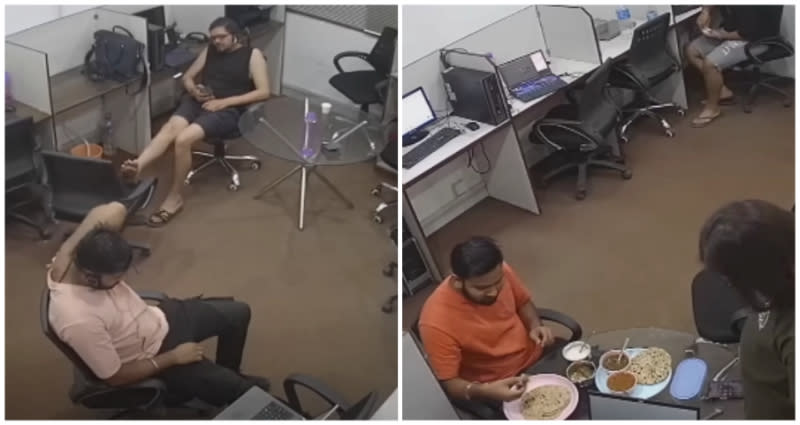 A YouTuber allegedly hacked into the CCTV cameras of an India-based scam ring office and gathered enough evidence of fraud to alert local police, which ultimately led to five arrests.

The most recent video uploaded by Scambaiter on Sunday, titled “I Got Scammers ARRESTED On Their CCTV Cameras!”, has garnered nearly a million views at the time of this writing.

In the 20-minute clip, viewers are given a look at CCTV footage taken from June 13-24, beginning with video of the alleged scammers at work, posing as Best Buy’s Geek Squad tech support employees, and ending with their arrest by local police in Punjab, India.

More from NextShark: Former finance minister of Afghanistan is now an Uber driver in Washington DC

As shown in the video, the scam ring office looks surprisingly similar to any other office, with rows of desks neatly sectioned off by dividers.

There are two to five people in the room at any given time, sometimes with headsets on, other times eating at one of the small middle tables.

They also look relatively young, most likely in their 20s or 30s, and are dressed in comfortable athleisure or a pair of slacks.

Throughout the clip, viewers can see and hear several examples of the alleged scammers calling potential victims.

“We don’t want you to get compromised or end up losing something on your identity,” starts one of the many examples of scams. “That’s why, you know, your computer give us the alert so that you can call Microsoft people and get this thing fixed for you.”

More from NextShark: SF Woman Gets Stranded in China After AT&T Mistakes Her Phone as Stolen

According to the narrator, the scammers then proceed to eat for the next hour or so and then call the victim back to charge “a ridiculous amount of money” for implementing a fake “firewall.”

Another man is assigned to call back the victim, assuring everything has been fixed and that a safety program good for one year has been put in place. The total charge for the fraudulent services comes out to be $339 “including all the taxes and everything.”

After gathering evidence, Scambaiter allegedly sent messages to several police stations in the Punjab area. They also hacked into the scammers’ computers and notified all of the victims of the fraud.

More from NextShark: Man With Whip Rants About ‘Filthy F**king Disease’ Outside Chinese Consulate in Sydney

Finally, on June 24 and as seen in the video, a group of police officers enter the building, shut down the electricity of the first and second floor and reportedly arrest five of the main scammers.

Scambaiter ends the video with a police report stating the charges of the scammers as well as media coverage of the incident.

Scambaiter regularly uploads scambaiting videos on their channel in which they “destroy scammers” and “their operation” by “hacking” into their computers.